Fall/Winter 2022 A selection of effortless layers for fall and winter you can dress up and down. Shop online Log in to your private store and view all options Read Mark Giordano on his long-awaited return to Toronto New store The AM House Toronto is officially open 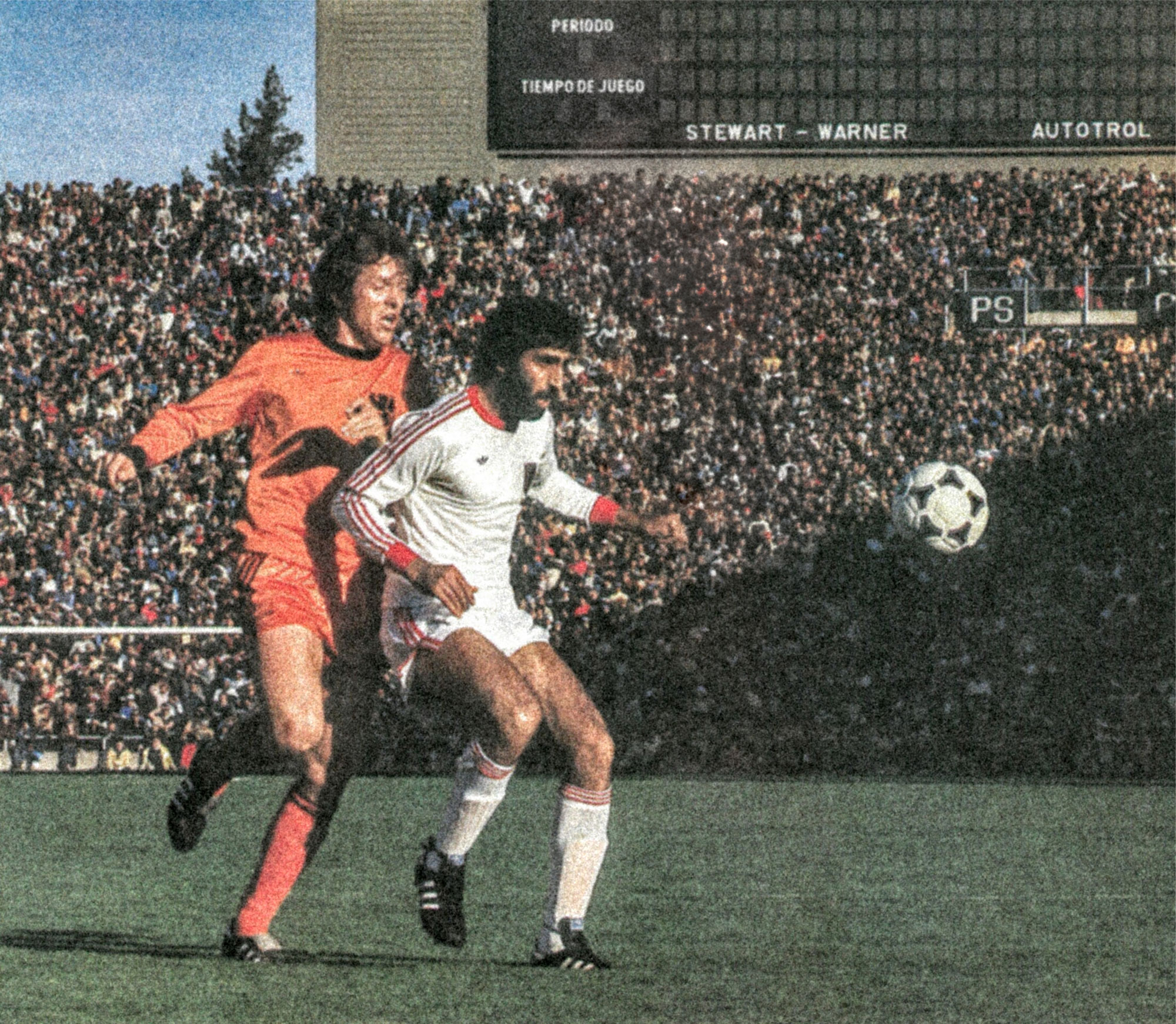 When first beginning the project and researching the match between The Netherlands and Iran in 1978, it only made sense to speak with someone who actually experienced it. Despite living in Spain nowadays, we managed to get ahold of then-footballer Arie Haan to hear about his take on the game, his memories of the pitch, and beyond.

What’s the first thing that comes to mind when you think back to the run-up to that 1978 World Cup?

The expectations for us were not that great because Johan Cruyff and Willem van Hanegem weren’t present at that tournament. At that time, those were the best players we had. The 1974 World Cup had created certain expectations, but when it turned out both players were not participating, they quickly cooled down

What was your own situation as a player leading up to the World Cup?

I joined the selection very late. In the years after the 1974 World Cup, I had not been called up for the Dutch national team in years. However, after I transferred to RSC Anderlecht in 1976 with the World Cup approaching, I wanted to rectify that and redeem myself. So, I went all out and pledged to win the European Cup with Anderlecht, to get back in the picture.

That happened. We won the final against Austria Wien in Paris and then soon after I was invited to join in the last friendly competition with the Dutch national team before the World Cup would take place. I scored a couple of goals in those matches and was eventually included in the selection. And with that, I achieved my goal to be a part of the 1978 World Cup.

What was the period in Argentina like before the first actual match against Iran?

We traveled to Argentina very quickly after that aforementioned friendly competition and started training right away at our residence in the mountains of Mendoza, near the Chilean border. That region sits at an altitude of about 1800 meters, so we basically couldn’t train for the first two weeks, whenever you exerted yourself, the atmosphere would more or less “burn away” your lungs. That was a strange situation, of course. I had been to Argentina before with Ajax, so I knew the country a little, but this was a completely new experience.

How did you perceive the social discussion in the Netherlands and around the world, about the tournament taking place under the Argentinian government at that moment in history?

At the beginning we were completely isolated in those mountains. It was a 45 minute drive to the city of Mendoza. At that time, that also meant being literally cut off from communication with the outside world. That changed during the tournament when we moved to the larger city of Cordoba. Regardless, there was also the sentiment in the group that it was important to still be there despite the circumstances. By going, it would provide space for the discussions about what was going on there, which would raise awareness and eventually bring change.

Going into that first match with Iran, did you know much about their football?

I didn’t know Iranian football at all at that time. We all had no idea. I went into that match blank. It was a kind of an anonymous opponent that we had to win against. Even the issue that they didn’t have official shirts, for example, we didn’t know anything about that going in. 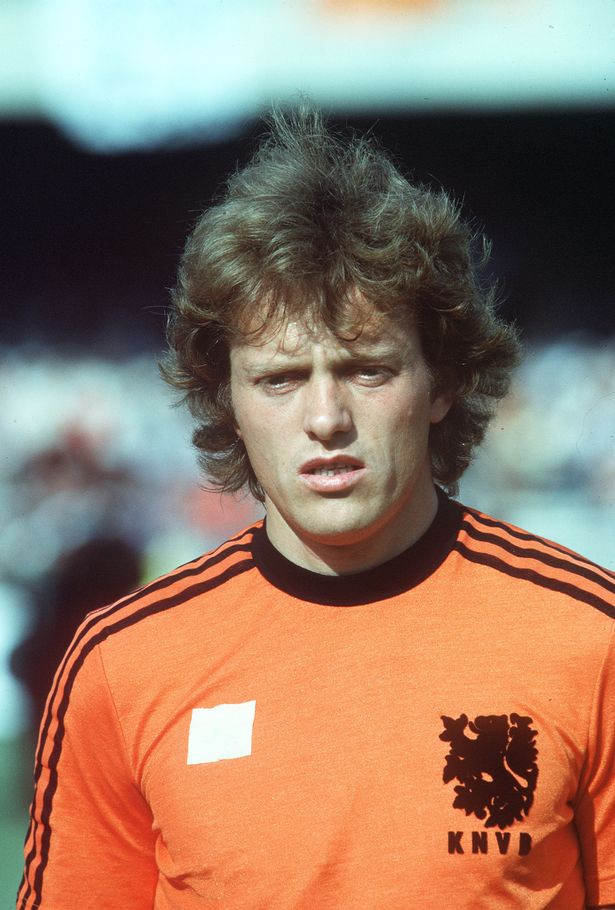 Did your personal motivation change once you were on the pitch in that match, which marked the official beginning of the World Cup for you?

The match was a rather simple victory. The score ended in 3-0 and with that, our focus quickly went to the next match. Rob Rensenbrink was the big man with his three goals. I don’t have that many memories about my own performance, except that I participated. I did not think I was going to play and wasn’t quite there yet in my head, which hurt my motivation a little bit. I didn’t start blossoming on the pitch until the second round of the tournament. After that solid first game, we played poorly against Peru in a bloodless 0-0. I ended up on the bench for the third game and that’s when something clicked. At that moment, something changed in my drive to show up and I started playing better, which I got the chance to do because of some injuries that occurred during the third match.

Did you get any sense of the social unrest in Argentina during the tournament?

When we moved to Buenos Aires, it did become clearer. Wim Rijsbergen went to the square where the ‘Mothers of the Plaza’ were sitting. I didn’t do that then and I actually regret that. Four years ago, together with Ernie Brandts, I was invited by Andere Tijden Sport to go back and speak to several ‘Mothers of the Plaza’. That was a very special experience. And it also confirmed the feeling that it was good that the World Cup took place there, because it brought international attention to the situation. Of course, that was never the objective of the military junta, but fortunately it worked that way. In my view, that also applies to today’s situation. 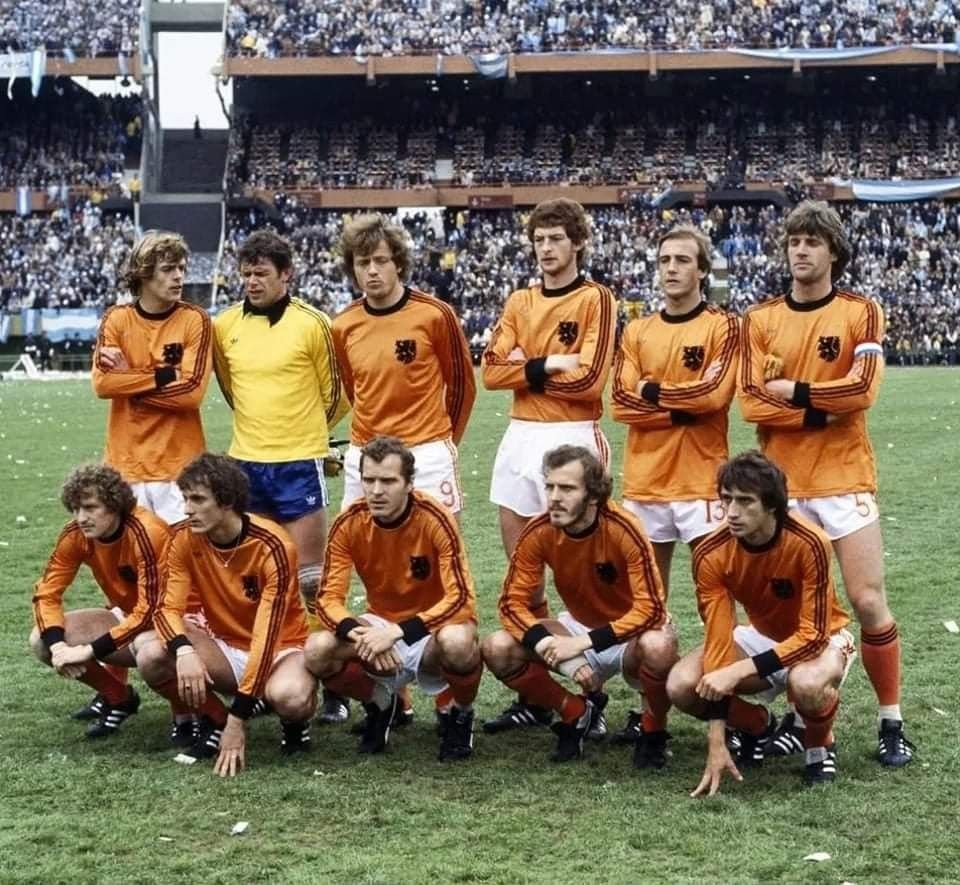 How do you feel today about eventually losing in the finals?

I always want to win, of course, but I’m also a person who can quickly put defeat behind him. I would never think in terms of “who would I have been if I had become world champion twice.” Those victories would not have changed me as a person. My attitude in my career has always been that I want to win everything, but I never had problems accepting a loss either. I don’t think a victory in 1978 would have changed my life.

In your eyes there really is no difference in being a champ or a chump?

For me, as a human being: no. Football as a global phenomenon was still developing. We were in the middle of that process. The Netherlands had emerged as an internationally renowned football country in the late 1960s and 1970s through the international successes of Feyenoord, Ajax and PSV and our good performance at the 1974 World Cup. That was a completely new development. Football was just beginning to make the impact it has had for decades now and is still growing to this day.

I look back at that time with great pleasure because back then we could still just be among people as football players. That has completely disappeared now. Which is actually a great loss: the free feeling that we had as top athletes has now disappeared for a lot of the top football players. They are hardly seen as human beings.

After your career as a player, you had a long career as a coach, working in Iran, among many other countries before officially retiring. After the first introduction to Iranian football in 1978, you briefly got a chance to be part of it.

Before I became the coach of Persepolis FC in 2006, I was offered the chance to be the national coach of Iran. Which I declined. But a few years later, an offer came up again to be a club coach in Tehran, I did take it. And that lasted only six months. While working in Iran, I lived in the North of Tehran, and in that area there was a somewhat more free feeling compared to other parts of the city. That feeling I had then, contrasts sharply with the situation in recent years. I suppose that the whole world has changed in recent years and in most areas, people are becoming more rigid in their beliefs. The same can be said for Iran. Just look at the past few months

But, even when I was there, no women were allowed in a football stadium. In general, women’s rights were not much better then, but in the North of Tehran for instance the situation did look different. If you did not engage yourself politically, as a foreigner at least, it would excuse you from the question whether you were for or against the Iranian government. But I know now more than ever; the power of a government like that is simply an all-encompassing one-way street. It will not even respect basic human rights. This is more evident now than ever.

However, every moment we got actively involved with football, the presence of the government would fade away for that period. The strength of football is that it can transcend those systems, at least for the time of a game. Football is first and foremost about people: the players, the staff, the fans. We often forget this, because of all the interests now intertwined with football.

The matches at the 1978 World Cup seem to mark the first phase in which football started to change into the global phenomenon it is today, where the human side has to compete voraciously with all of the other interests.

It’s because of these other commercial interests (and political interests for that matter), that the human factor of the sport is increasingly forgotten. A powerful organization like FIFA should make conscious choices that put people first. The essence of football still transcends, but as other interests continue to have more importance, we might lose the human factor completely over time. Yet, without people you have no football to begin with. It is high time for certain people to remember that again. 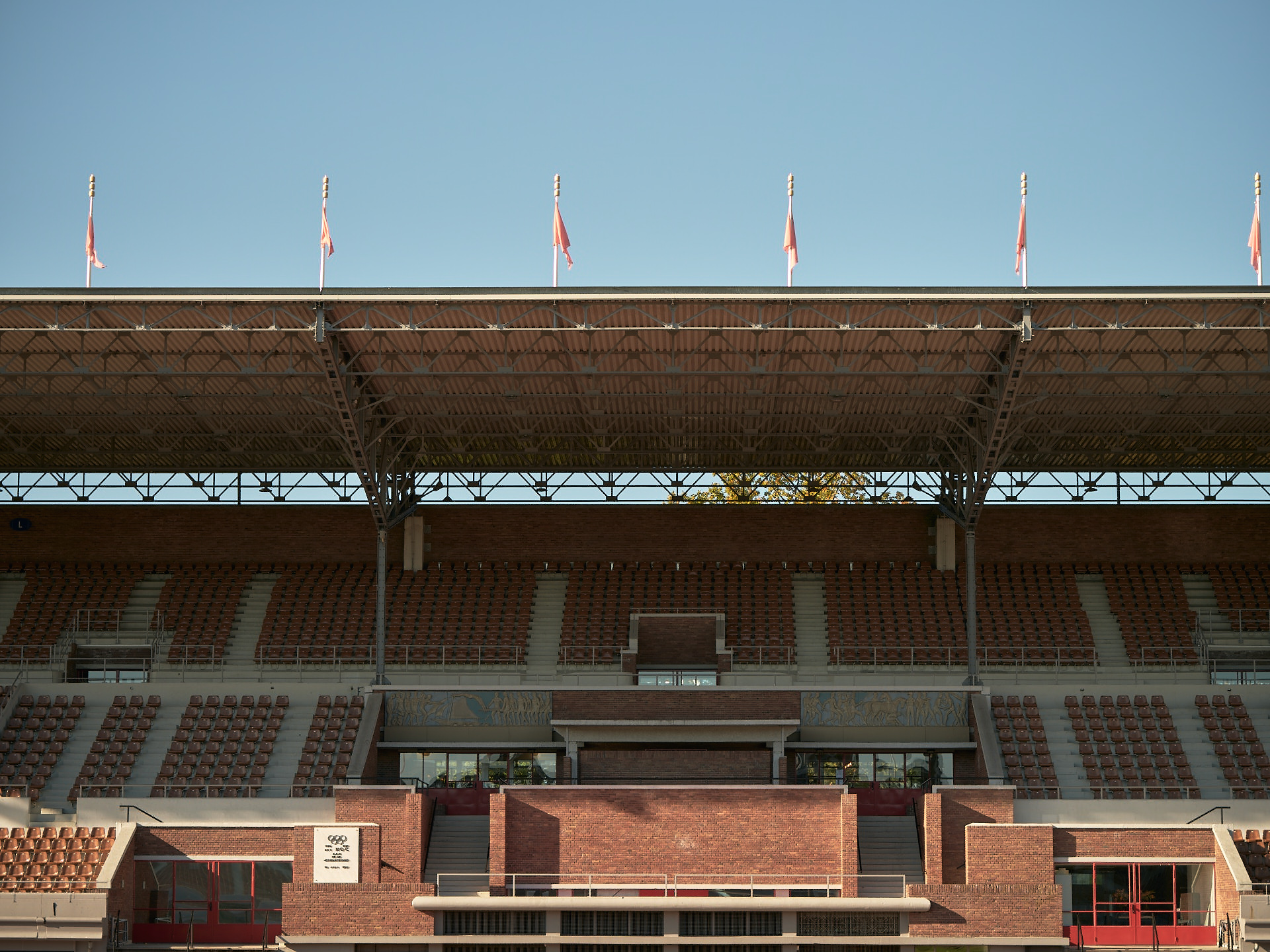 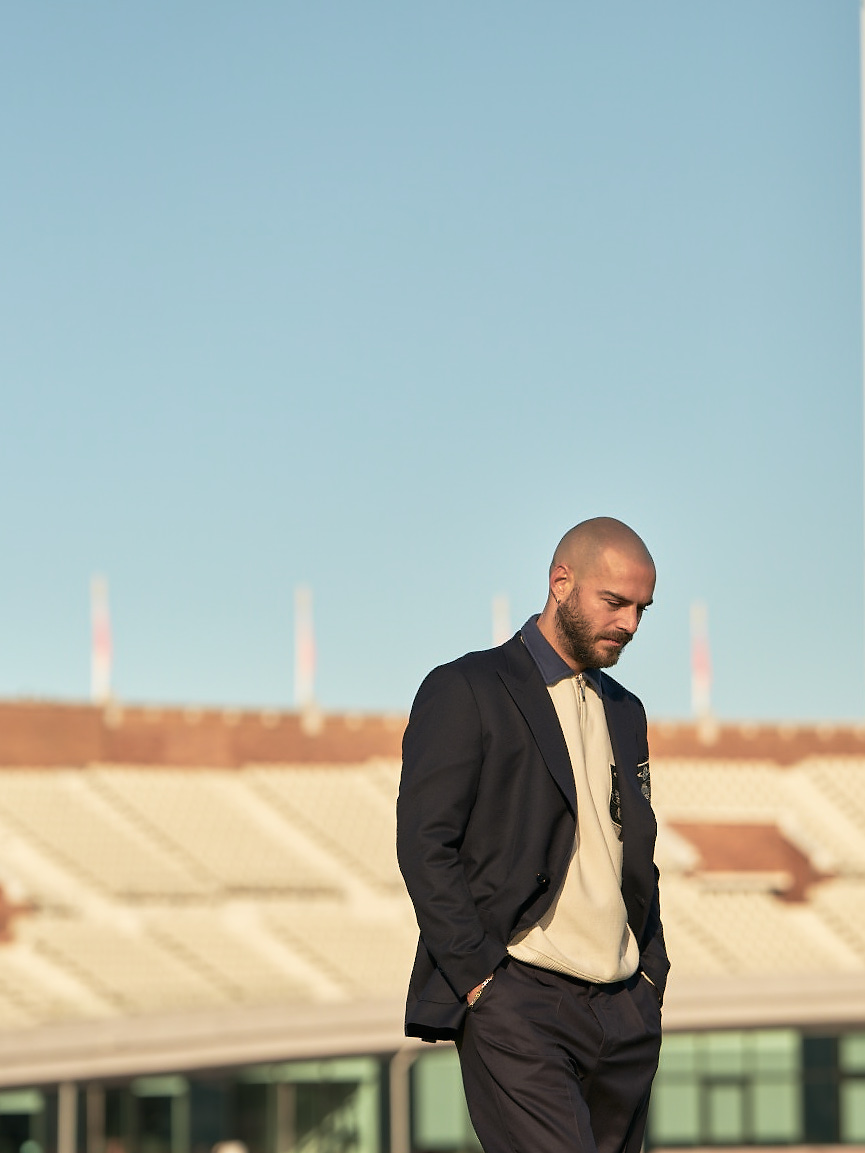 Choose the type of appointment
2 / 7
When's the wedding?

Our average delivery time is 4 weeks. For grooms, we recommend coming by at least 8 weeks before to give you enough time to decide, have your garments made, and wear them in before the big day.

Wedding date
Continue I don't know yet
3 / 7
Where are we meeting?