Fall/Winter 2022 A selection of effortless layers for fall and winter you can dress up and down. Shop online Log in to your private store and view all options Read Mark Giordano on his long-awaited return to Toronto New store The AM House Toronto is officially open

When actor Benja Bruijning sets his mind on something, he doesn’t let go. Whether it’s an early-blossoming career, now 20-years long or in his private life, shared with actress Anna Drijver and their two children. Driven by an everlasting curiosity, Benja has a need to fathom the world around him through exploration, investigation and eventually execution. As a result, he creates a life for himself based on choices that feel considered, deliberate and on his own terms.

This particular approach to life shows early on. From a young age, Benja seemed destined to follow his great-grandfather and actor Jo Sternheim’s footsteps, playing lead roles in several award-winning films as a teenager. Yet rather than simply continue what had started, which quite likely would have been an easy ticket to some kind of career, Benja chose to explore the craft from the ground up and pursue the performing arts professionally.

A few years after graduating from the Amsterdam Drama Academy, Benja starred opposite Carice van Houten of Game of Thrones fame in the box office hit FAMILY WAY (2012), making him a household name in The Netherlands. In the years that followed, Benja performed in high-profile Dutch film and television, showing his charm, good looks and range — never afraid to do the unexpected. You may also recognize Bruijning from the stage, having written for theater, including a critically acclaimed debut, NOT MEANT THAT WAY (2010), and appearing in both classic and modern works, such as LULU (2016), Tom Cruise’s role in the adaptation of RAIN MAN (2012) and most recently, the highly anticipated book adaptation of THE INTERPRETER OF JAVA (2019).

This unique approach seems to permeate everything Bruijning does, from the roles he selects to how he lives day to day. With an inquisitiveness that is as introspective as it is extrospective, Benja seems to have no difficulty in critically assessing what he’s doing, so he can effortlessly pivot to any new way he feels he should or could be spending his time. We sat down to discuss finding passion, perfection and your own way. 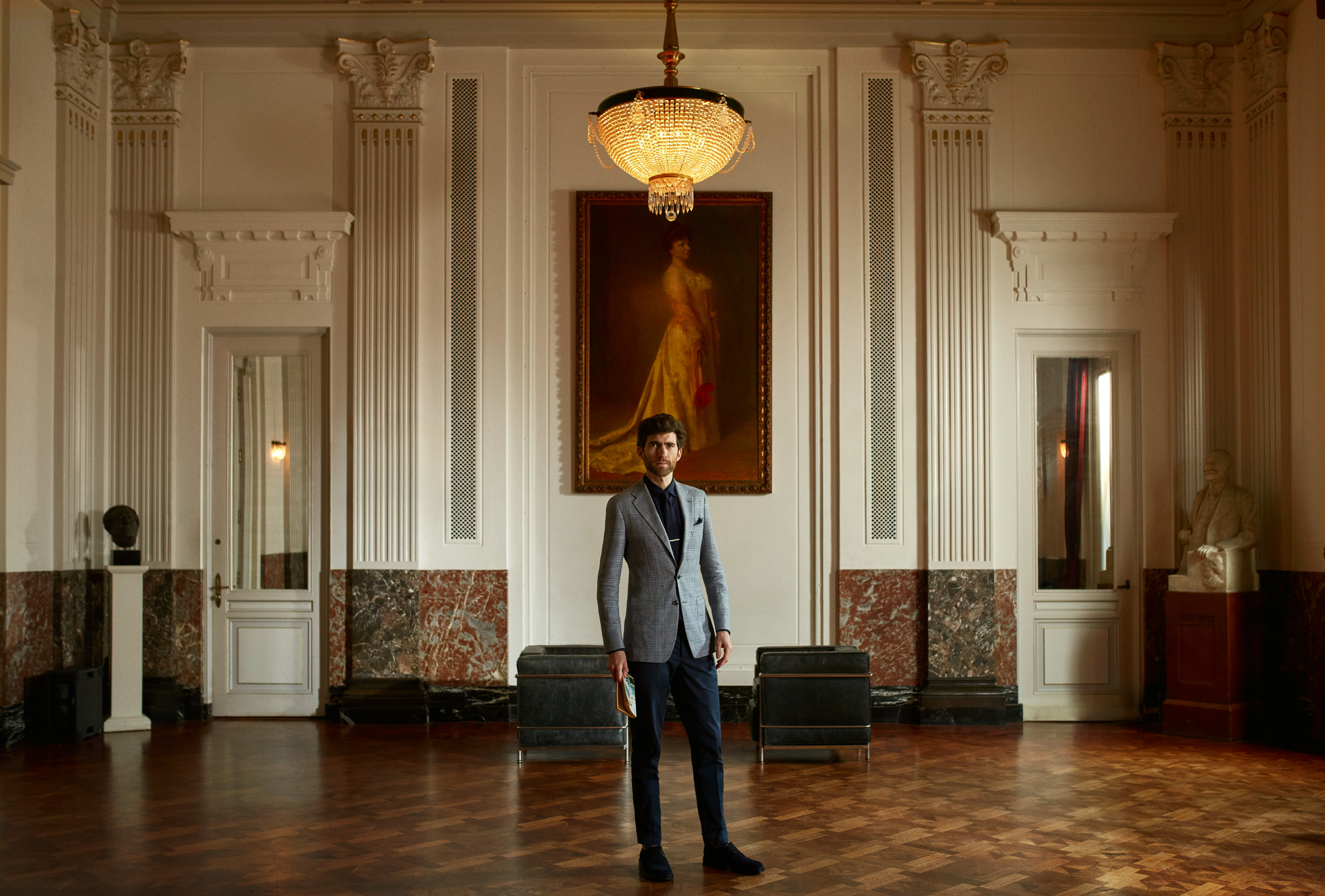 Your recent Atelier Munro campaign was shot in Amsterdam’s municipal theatre, Internationaal Theater Amsterdam, where you’ve performed throughout your career as an actor. We hear you weren’t the first one to do so in your family?

Yes, my great-grandfather, Jo Sternheim, was also an actor. A portrait of him by painter Harry Koolen even hangs in one of the hallways of the Internationaal Theater Amsterdam. I never met him though, he had already passed when I was born. I don’t really remember anyone telling me: “Jo, your great-grandfather, was an actor”. It was just a given when I was younger. I didn’t find it very interesting at the time, to be honest. I was as indifferent to it as I was to the fact that my mother’s grandfather had a furniture store in the Molsteeg in Amsterdam. I was more interested in playing football outside.

So, the fact my great-grandfather had been an actor, actually didn’t really matter to me growing up. More family members on my father’s side had a connection to the theatre. My great-uncle Joost Sternheim, for example, was the director of the Frascati Theatre, which also didn’t interest me much when I was younger. He passed away when I was just 10 years old. Later in my life, of course, I thought it was a shame that I never came into contact with them, but they were not really part of my life, as can be the case with family. 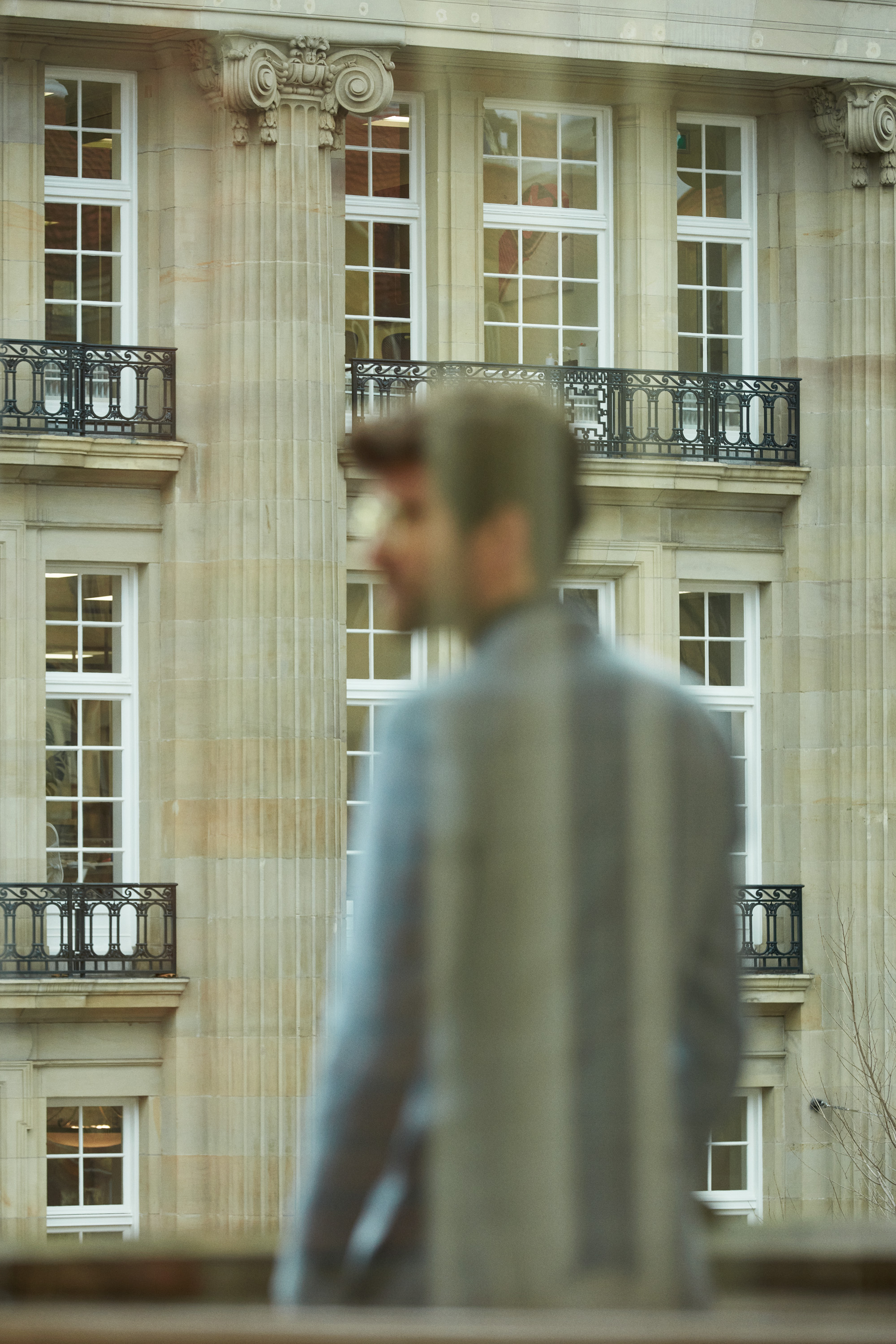 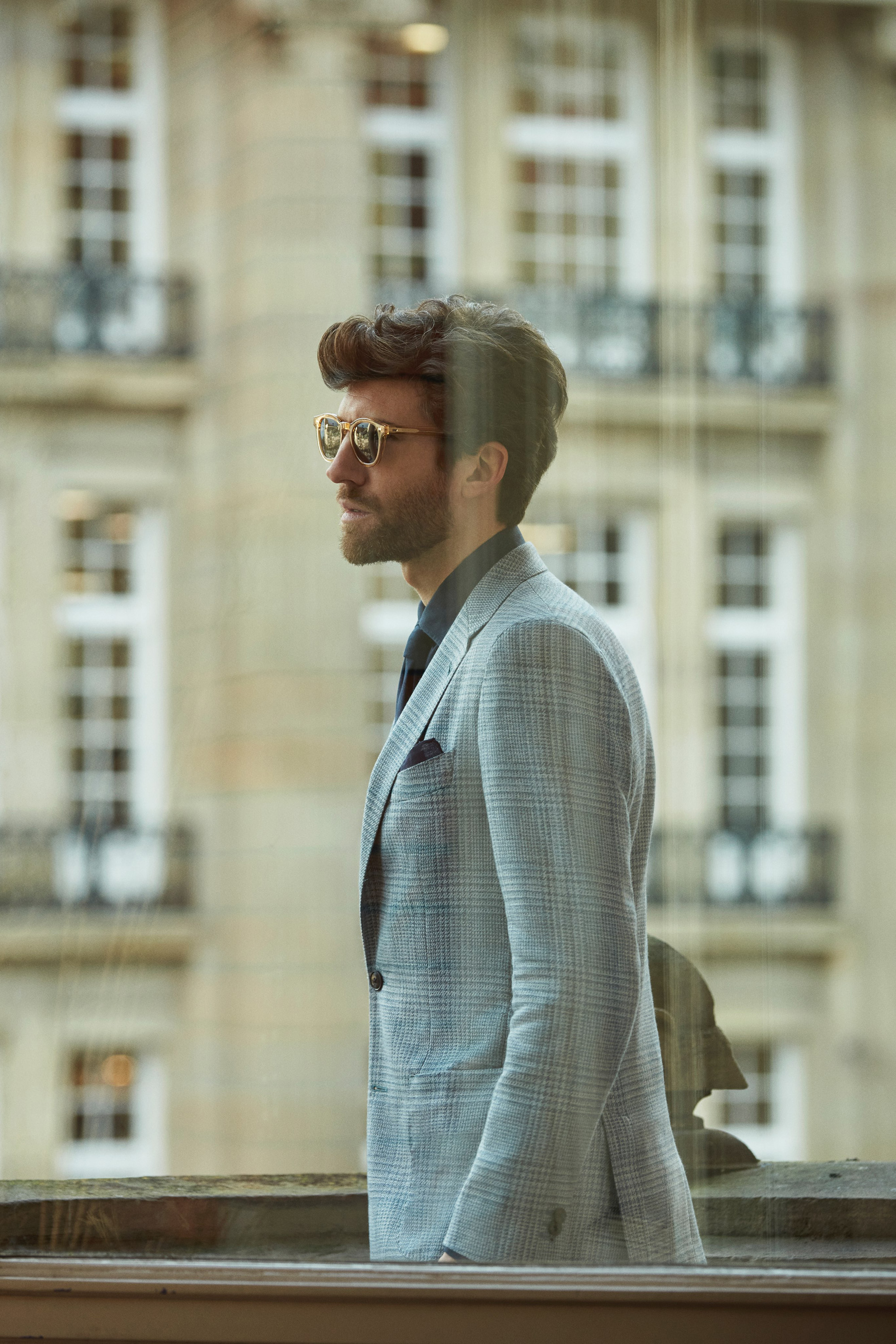 Did your attitude about them change when you chose to study at the Amsterdam Drama Academy?

It did change a little bit. I remember selecting a recording I found somewhere of my great-grandfather in which he recites a socialist poem, to imitate for one of the first assignments at the Drama Academy. The class was focusing on reenacting old recordings, normally supplied by the school. It was all about becoming aware of how use of voice has changed. And how, for example, the use of voice on stage in the 1950s was a lot more dramatic. My great-grandfather performed all the way until his pension, and I was an aspiring actor at that point. Slowly I started to realize what that actually meant, in terms of how much effort he must have had put in his career.

At that moment, the very start of my own career as an actor, it did give me some kind of confidence: that the path I wanted to follow had already been walked by a family member. I would have made it through the Academy without that fact, but it was very nice and definitely special.

“It’s a rather cozy idea that my family has performed in the theatres I play in, before I did. I feel very proud whenever I walk past my great-grandfather’s painting in Internationaal Theater Amsterdam. He received an honor reserved for a select few.” 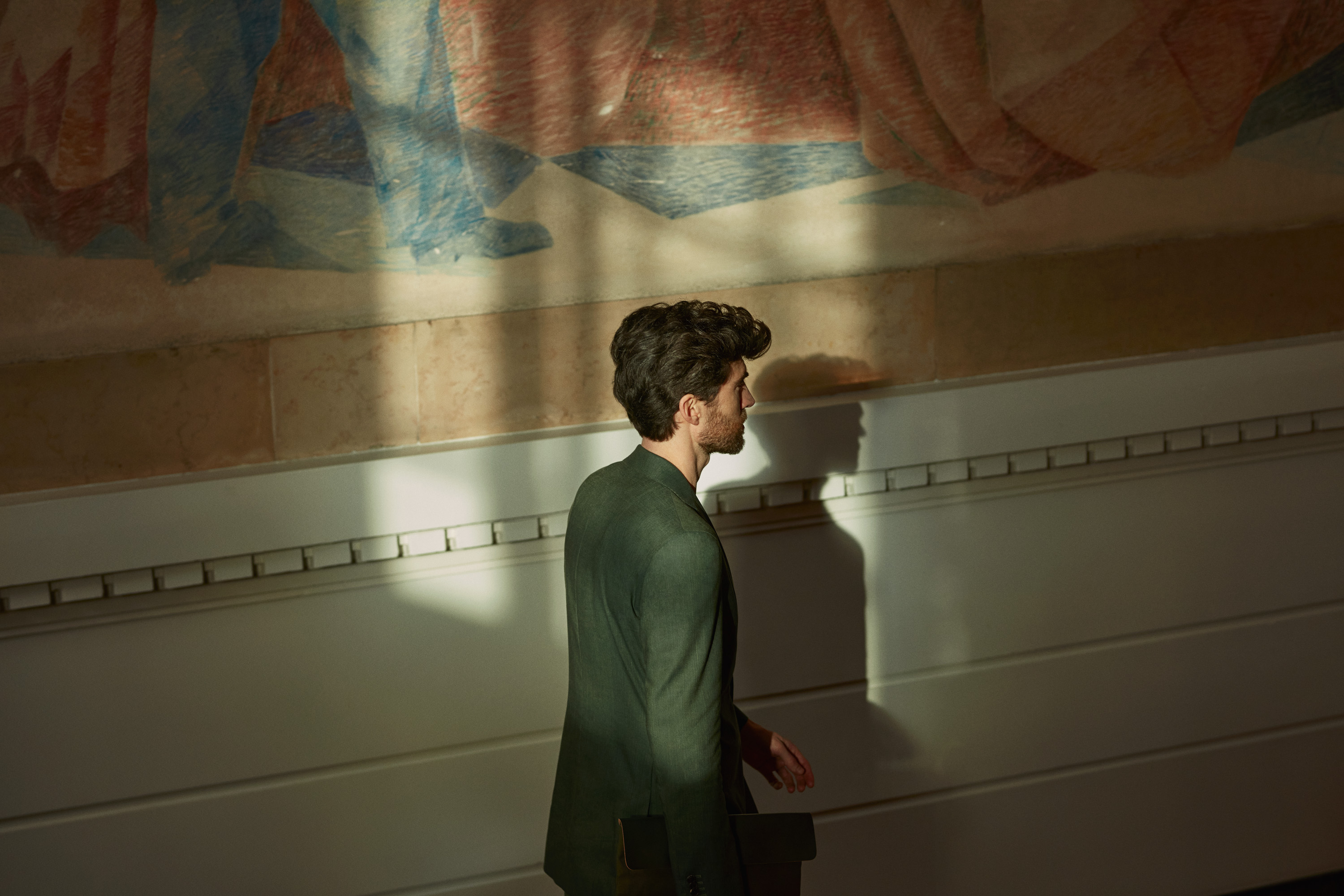 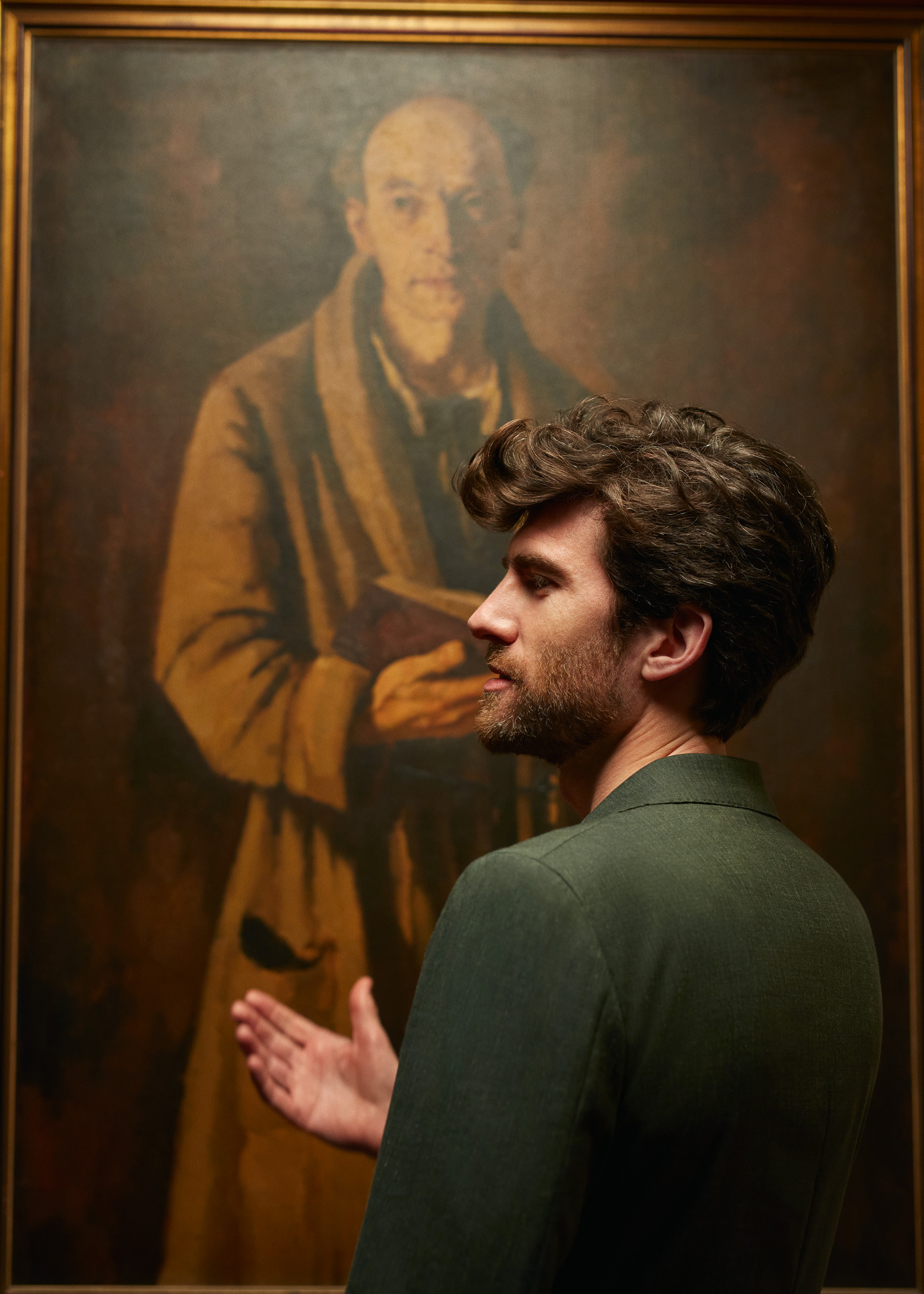 Are you aiming to get there at some point?

I don’t have it as a specific goal, but I am clearly very aware that I still have a lot to learn as an actor. Whenever I do a play, whether I do it sixty times, thirty times or just three times, after every performance I think: “Okay we should try to start that one moment just a touch later or bring that one line just a moment earlier. The energy needs to be a bit more intense there, or I think we should just take it back here.” I am always searching for ways to improve what we are doing, what I’m doing as an actor, to optimize the experience. But this attitude also applies to other things in my life, from the loading of the dishwasher to the hanging of the laundry. I can’t help it, and it’s probably annoying to some, but I have an intrinsic need to find the best way of doing something.

You’ve implemented this attitude to more aspects of your life?

Yes, with everything I’m always in search of the optimal system. Even when I’m of the opinion that I’ve found it, in any aspect of my life, I force myself to stay open to better methods. 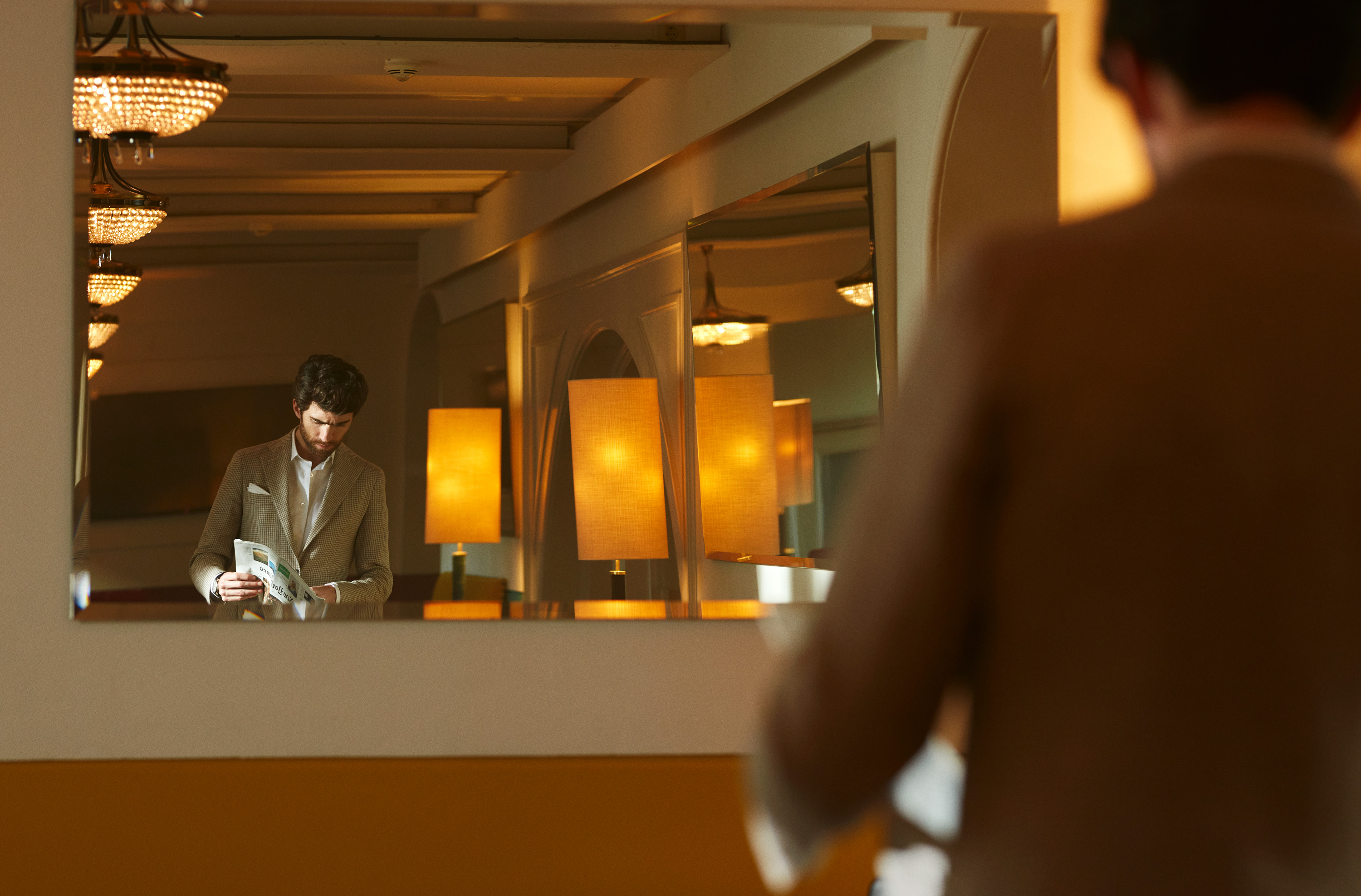 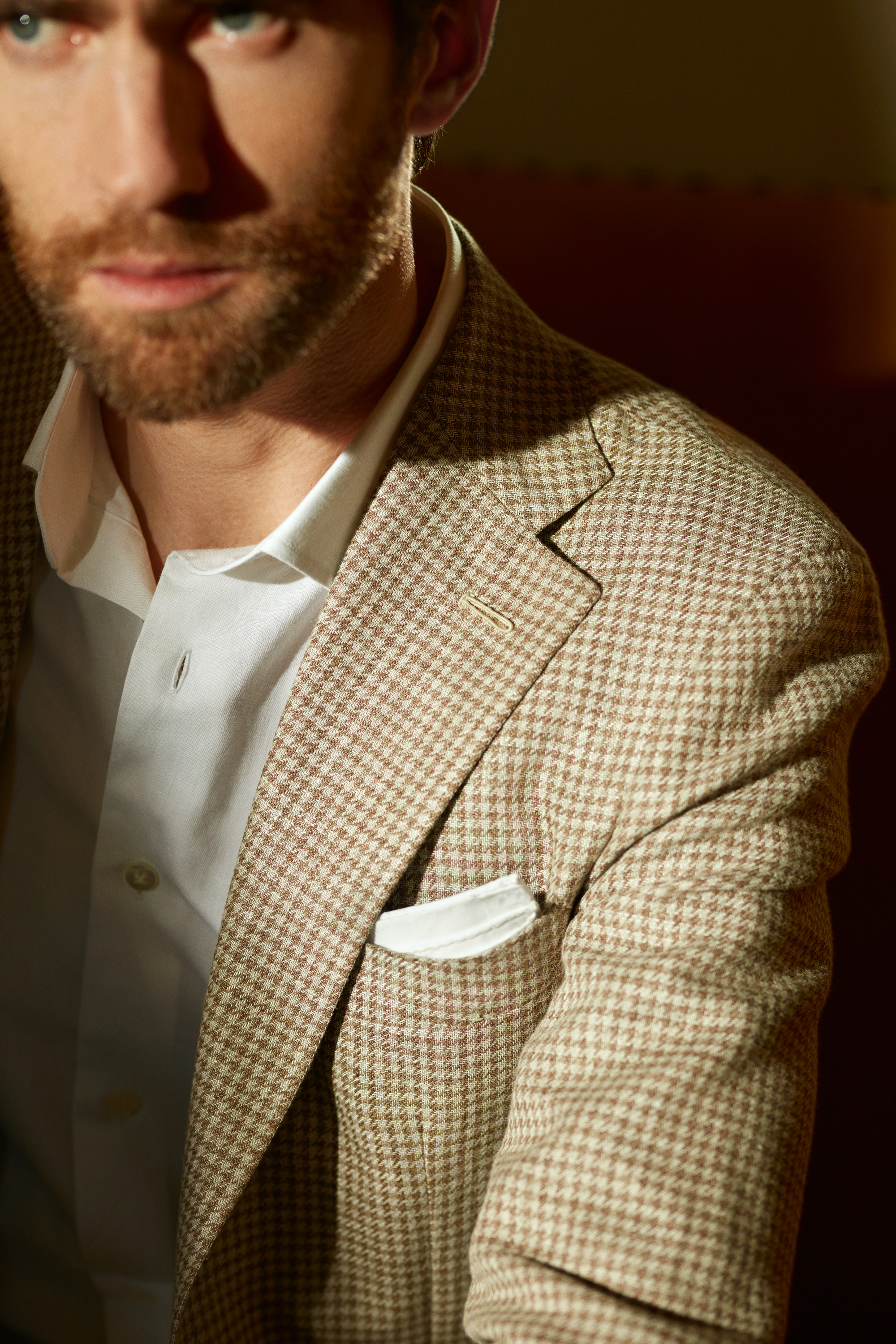 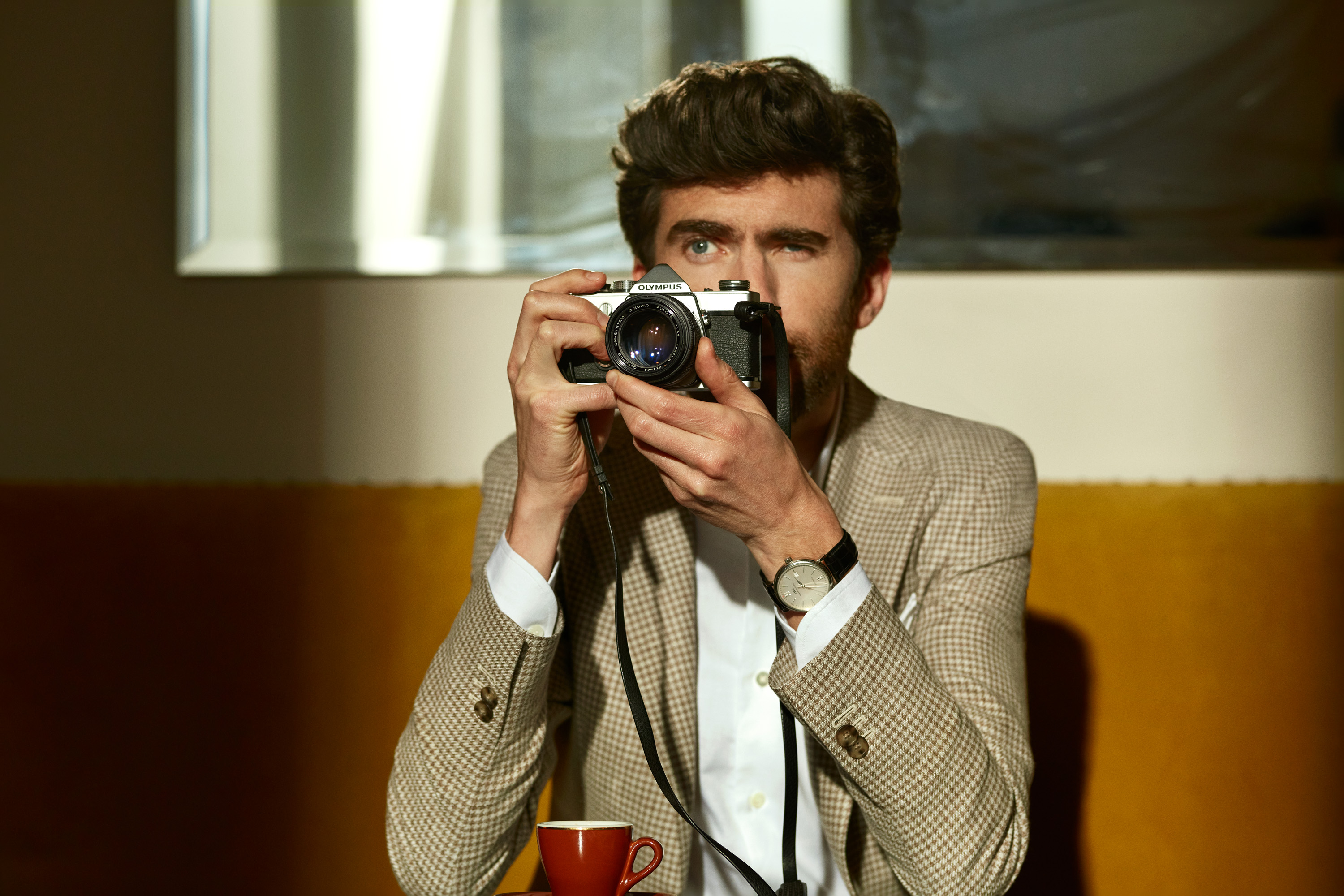 For instance, by roasting your own coffee to your taste?

Yes! It never stops intriguing me how certain things work and are constructed. For example, when I visit Atelier Munro and they explain how a certain fabric is woven, I can hardly comprehend it because it is so specific. I still need a lot more background information and more experience to fully understand what that’s about, but I find that deeply fascinating. As a coffee aficionado, I also wanted to learn about all aspects and details that make coffee what coffee is. The best way to grind a bean, roast a bean, everything about it. I’m still learning a lot, as I just started doing it about a year ago, but it already brings me great joy to build my favorite coffee flavor in a custom way. 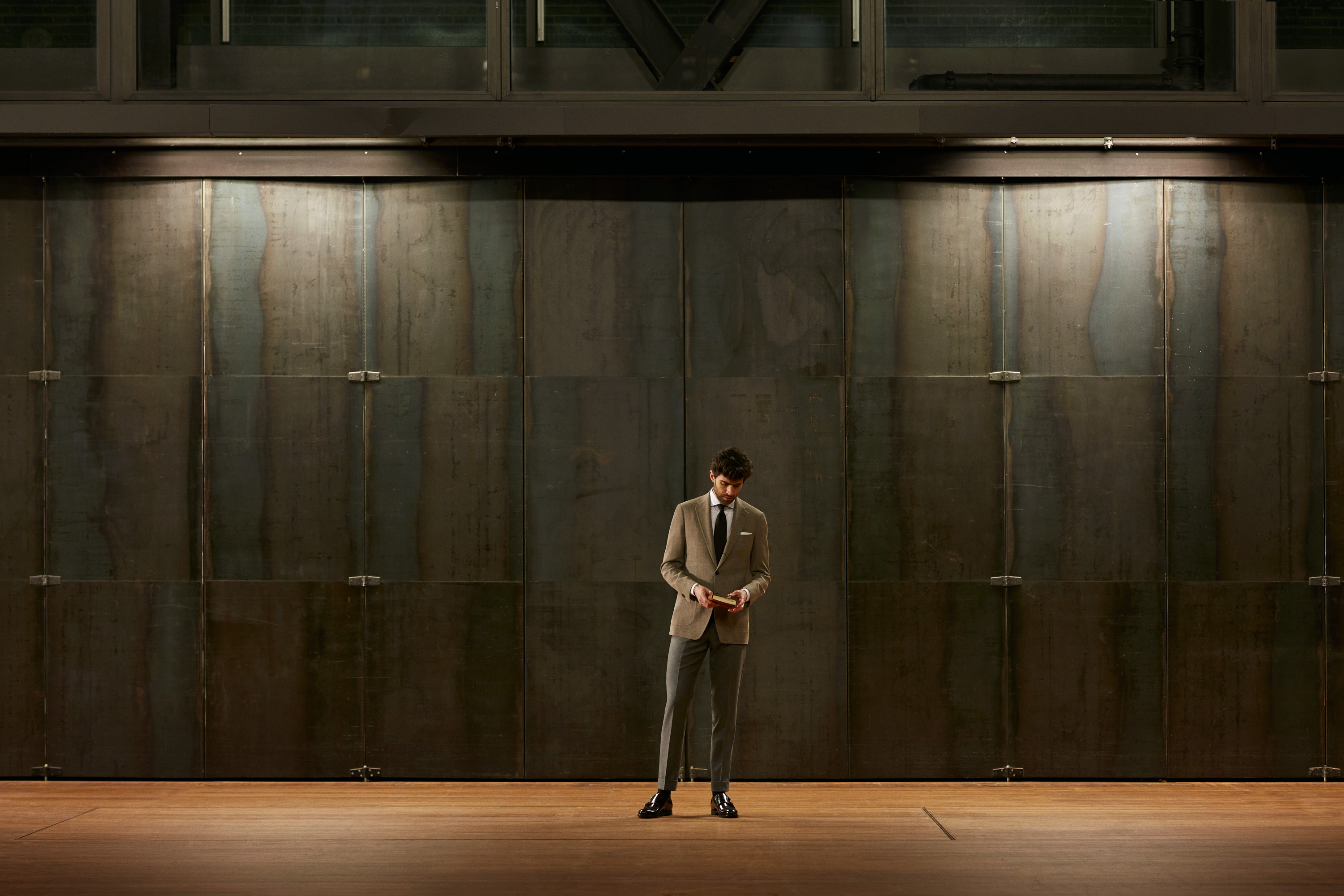 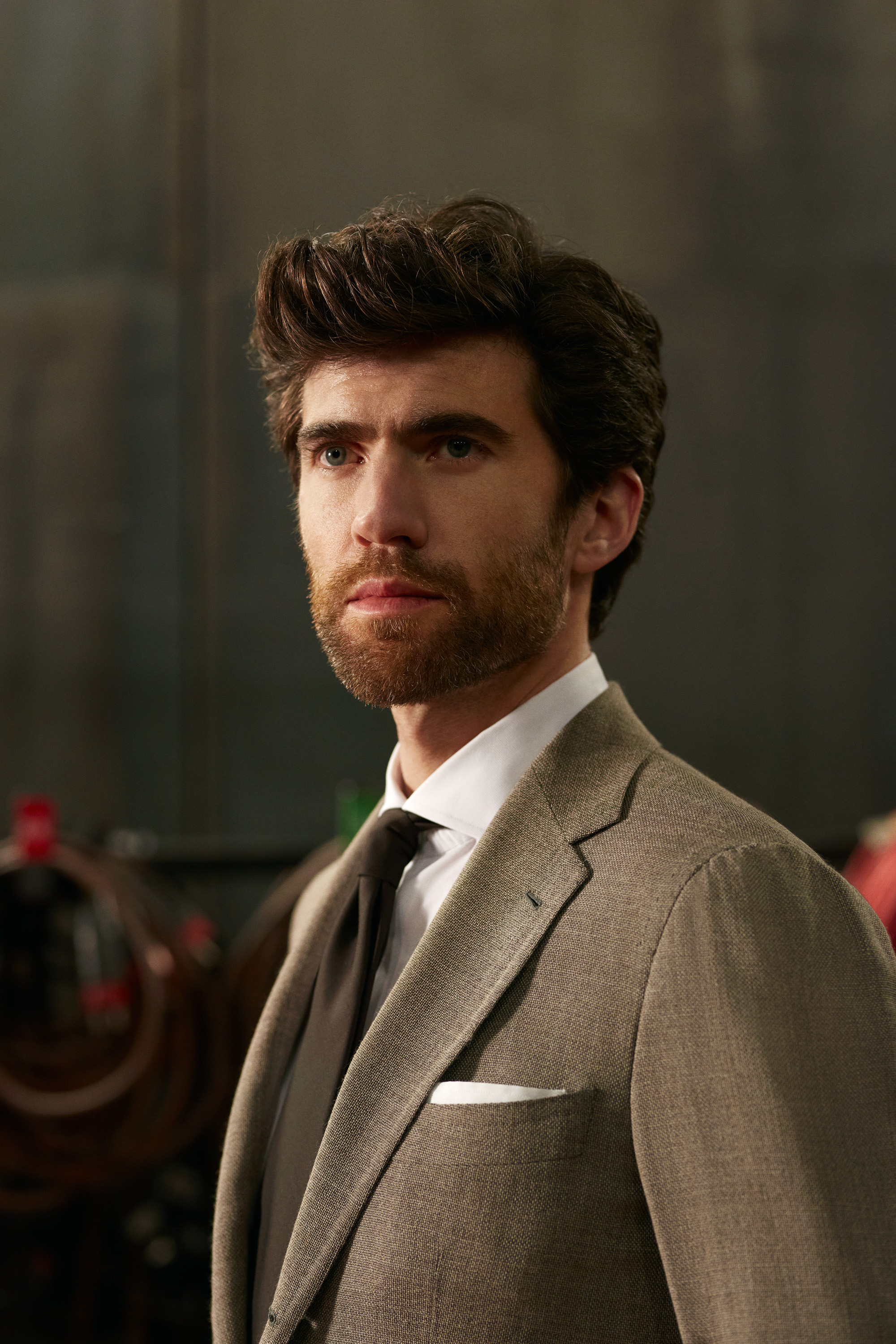 In 2016, you became a father for the first time and in 2019 your second child was born. How has this enhanced your outlook on how to live your life?

This is one of the many things I’m still learning about every day: parenthood. One of the most fascinating things it has taught me, is that as a child you cannot do anything but follow your own character. Observing that as an actor is incredible. What comes natural to them is the most difficult thing for an actor: remove all context. I’m very grateful to experience that every day, it teaches me so much.

“I think character always shows in relation to conventions and how you interpret them as an individual. How you personally relate to these conventions.

That might be the answer to your question: how one chooses to follow certain conventions and go against others. That’s how you manifest your character in life, to me.”

Taking all these elements together, how would you describe what character in life is to you?

That’s a hard question. I don’t know why, but it reminds me of a class at the Drama Academy. In it we had to portray whatever came to mind. Everything was accepted. But what wasn’t accepted: staying put and do nothing. I just didn’t have the urge to jump around like a chicken or take my clothes off, which the others were doing. Just carrying out the assignment by doing nothing, because of this context of expectations in which everyone was acting as extreme as possible, made normal behavior unaccepted. I think character always shows in relation to conventions and how you interpret them as an individual. How you personally relate to these conventions.

That might be the answer to your question: how one chooses to follow certain conventions and go against others. That’s how you manifest your character in life, to me. 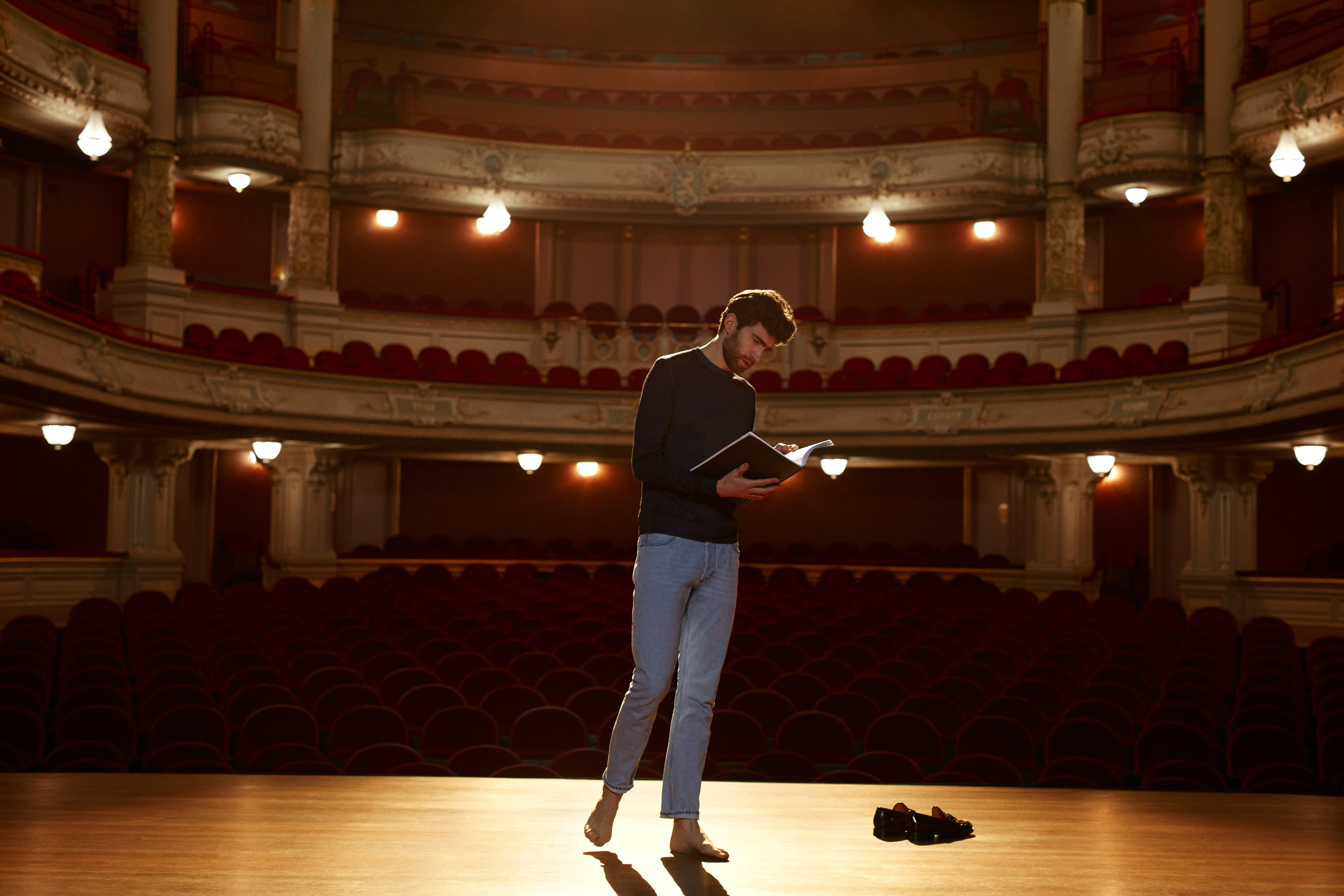 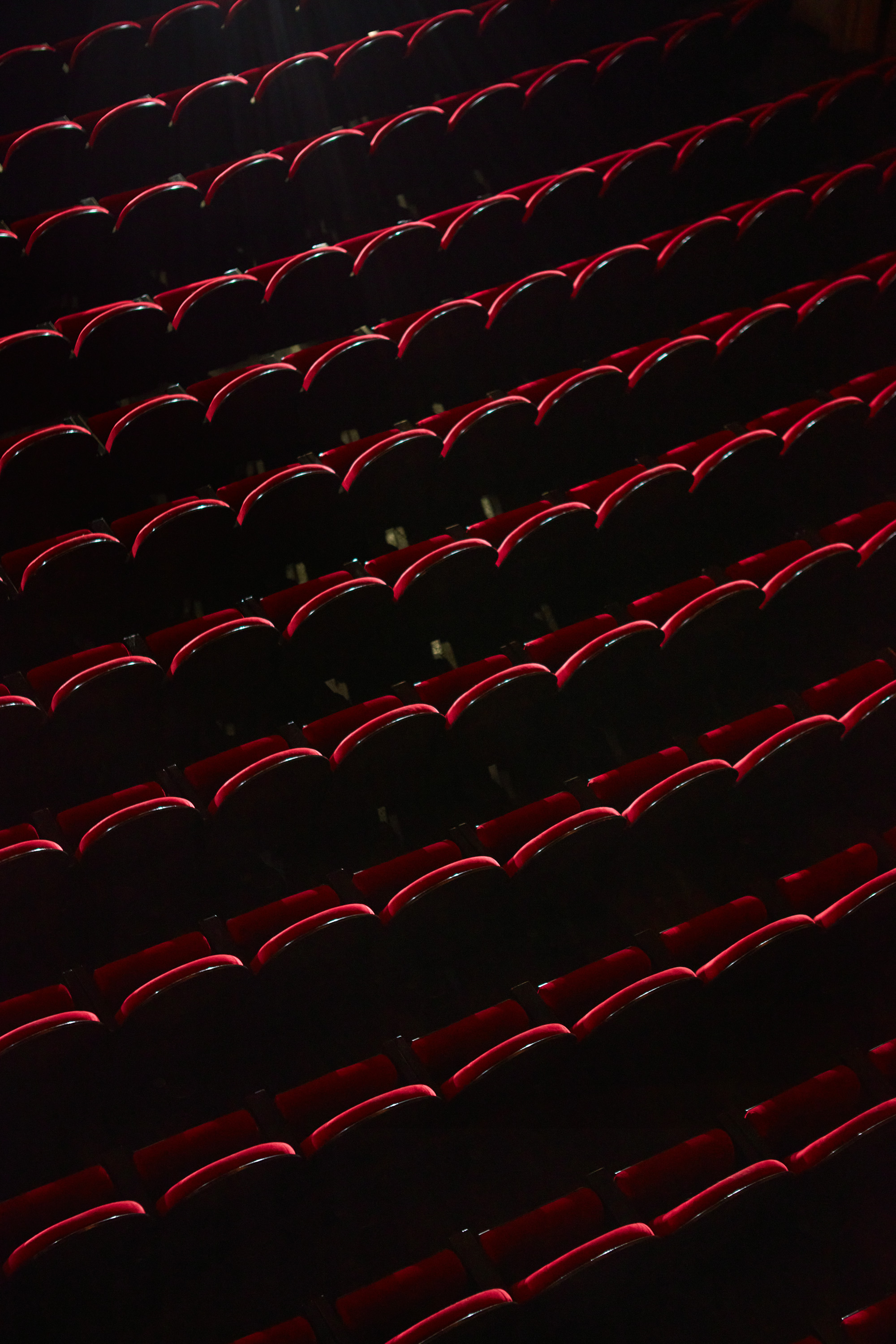 A man of many talents, it may be hard to pin Benja Bruijning down on one thing. Though it seems that’s not where this actor’s aspirations lie anyway. Instead, he goes where his curiosity leads him, always growing and redefining himself. Unafraid of making conscious choices, big or small, to curate the life he wants. It’s an admirable approach to life and one akin to our brand.

Now Benja has brought that discerning eye to a capsule collection. Everything seen here is personally curated to reflect his character and tailored to his form.

Choose the type of appointment
2 / 7
When's the wedding?

Our average delivery time is 4 weeks. For grooms, we recommend coming by at least 8 weeks before to give you enough time to decide, have your garments made, and wear them in before the big day.

Wedding date
Continue I don't know yet
3 / 7
Where are we meeting?