Spring/Summer 2022 Get inspired by easy-to-layer pieces for today’s flexible wardrobe Shop online Log in to your private store and view all options Exclusive Available now: the limited-edition suitcase in collaboration with Alstermo Bruk
←  Traditions
Details

Learn about our design and craftsmanship: the considered touches that separate a good garment from a great one.

Also known as an ‘Asola Lucida’ buttonhole, this sartorial detail will give your suit or jacket an elegant touch. The Milanese is made using a piece of silk thread called a ‘gimp’, which is then tightly wound around by another thread in a whipstitch to give this detail its characteristic look. It offers a subtle yet beautiful aesthetic. Achieving Milanese perfection is a delicate time-consuming process and something only a quality tailor can provide – no machine can imitate it. 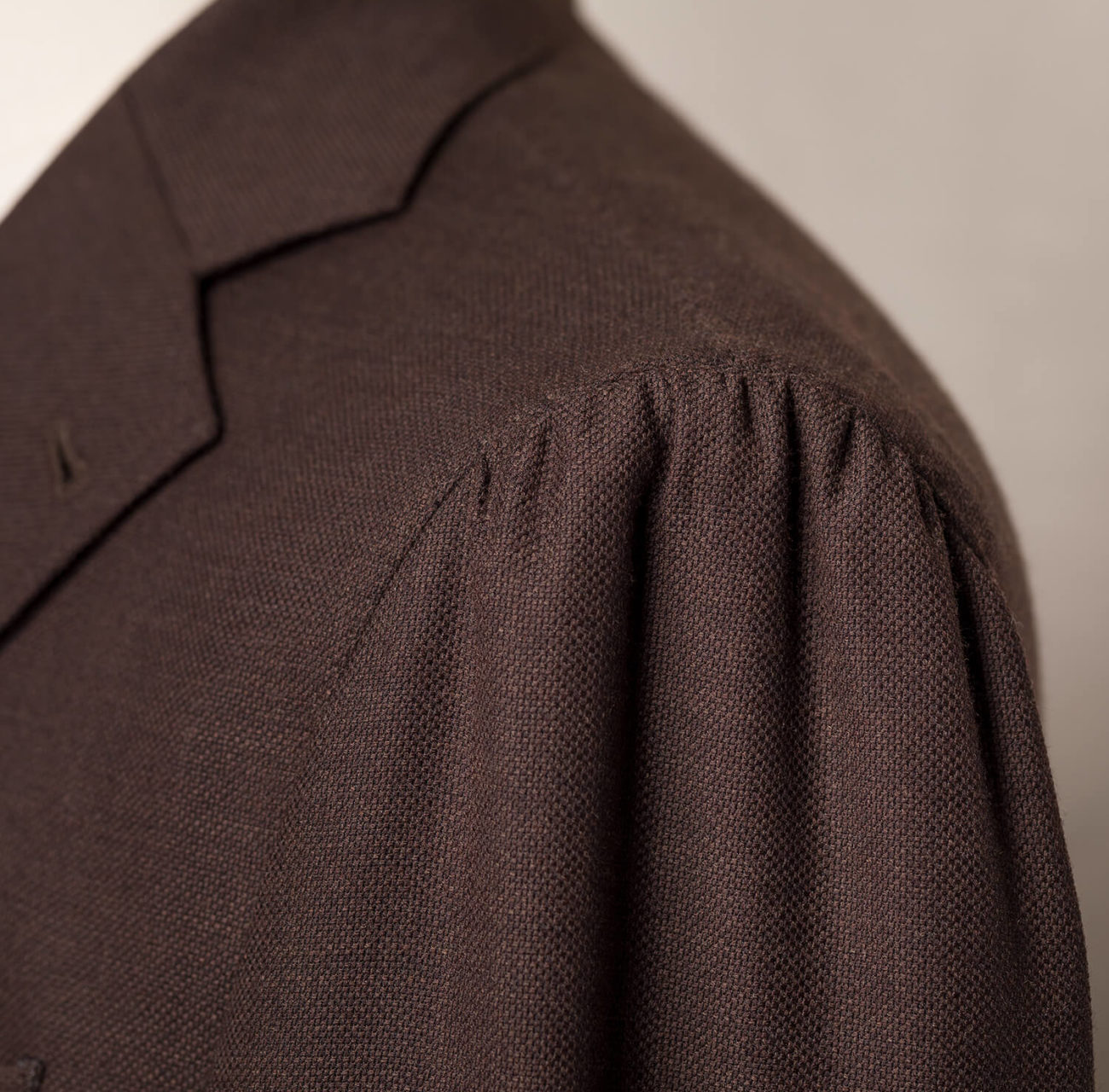 A particular style of shoulder that is revered in the tailoring world. A ‘spalla manica a camicia’, often simply referred to as the camicia shoulder, is a style popularized by Neapolitan tailors. Roughly translating to ‘shirt shoulder’, it was coined for the distinct pleats at the sleeve’s head that are made by inserting a larger sleeve into a smaller armhole circumference. The seams are turned inside towards the shoulder to create a distinct shoulder where the fabric falls down – a structure that allows for a natural drape and greater range of arm movement. Great craftsmanship is required to achieve this look. 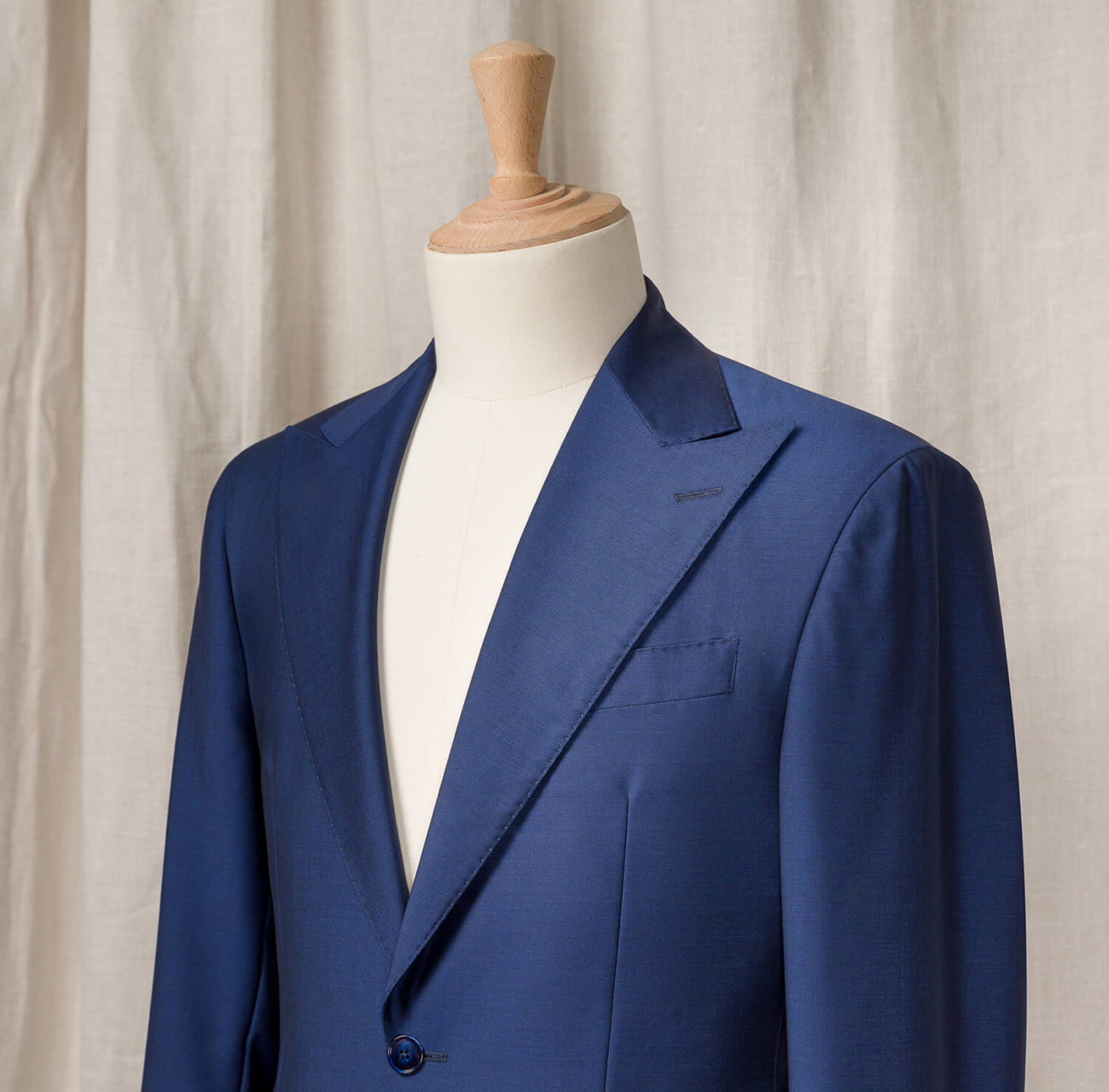 This detail is so named for the top of the lapel which juts out at an angle, reminiscent of a – you guessed it – mountain peak. Although the peak lapel has been through a variety of generations and trends, its angular forms all have one thing in common: they’ve always been viewed as fancier than their conventional notch counterparts. Perhaps that’s because they’re less common — and for good reason: the peak lapel is considerably more difficult to make, and therefore more exclusive.

Unlike the notch lapel, which is rarely seen in formal evening wear, a peak lapel is an equally respectable choice for your tux and your business suit, and it’s virtually the only lapel you’ll see on a double-breasted jacket. In addition to adding an extra element of je ne sais quoi, the peak lapel is a great and subtle way to optically broaden the shoulders and slim the waist.

Featuring a smooth, wrap-around look reminiscent of a shawl, the origins of this elegant detail in western fashion trace back to the late 17th-century banyan – a robe-like garment favored by wealthy gentlemen and influenced by newly imported styles from the Dutch East India Company (VOC). As this robe evolved into the 19th-century smoking jacket, the dinner jacket and the tuxedo styles we know today, the shawl collar came along for the ride. Now most often seen in a fabric similar to the jacket but with a tad more sheen, the modern man’s shawl lapel is almost exclusively reserved for formal evening wear — with the occasional rebellious exception. 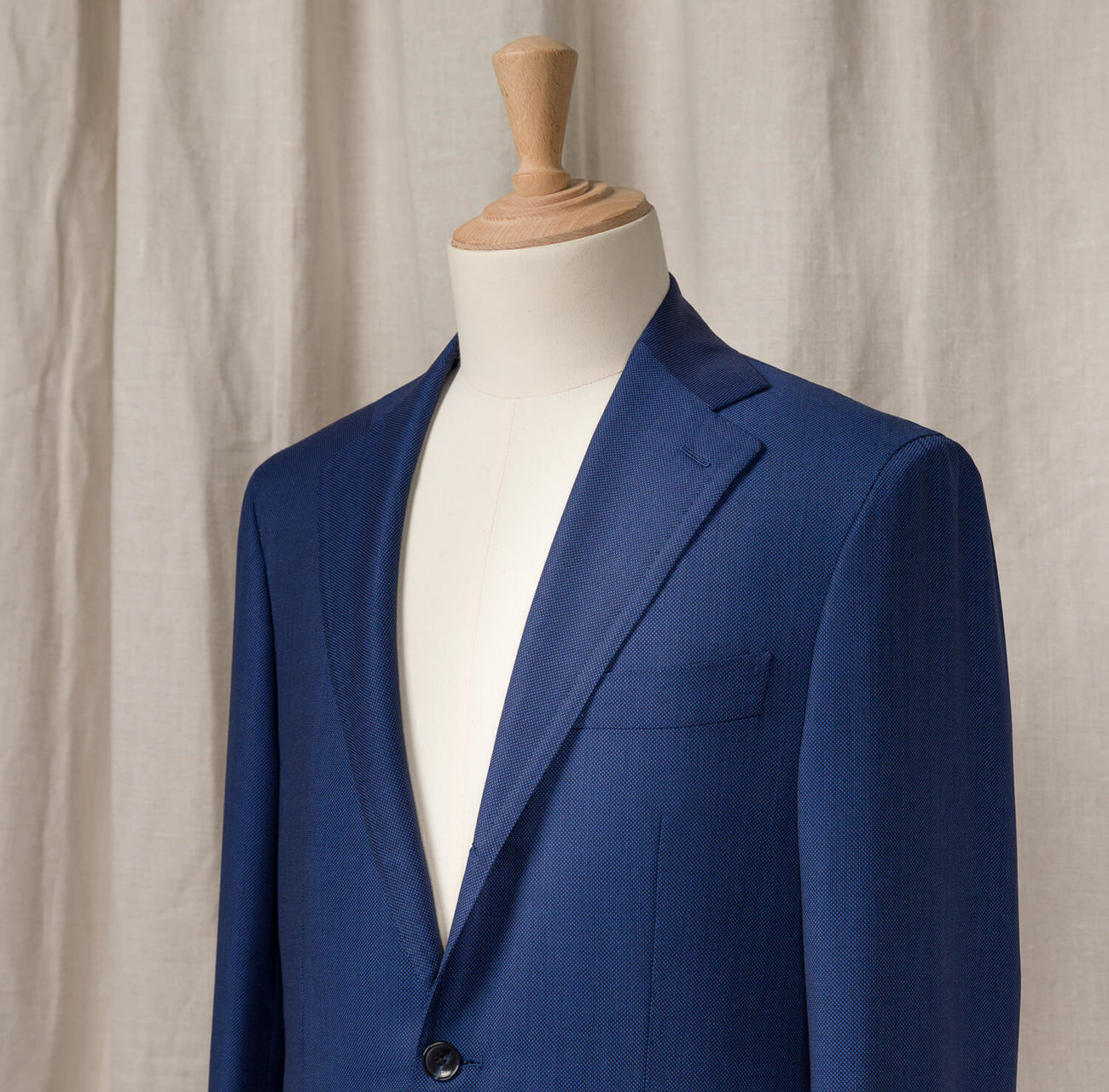 A few hundred years ago, formal jackets featured a row of buttons in the center-front that reached all the way up to a gentleman’s neck. But, as legend has it, some gentlemen would fold the tops of their jackets down when they felt warm (or relaxed), creating a newfangled V-shaped neckline. Eventually, some 19th-century hipsters decided this look was so cool they would make these folds permanent — hence, the root of the word, lap, which means a flap or fold. This also explains the standard notch, which was the first and most straightforward version of the point at which the jacket collar connects to its lapels (in technical terms, this point is called the gorge). 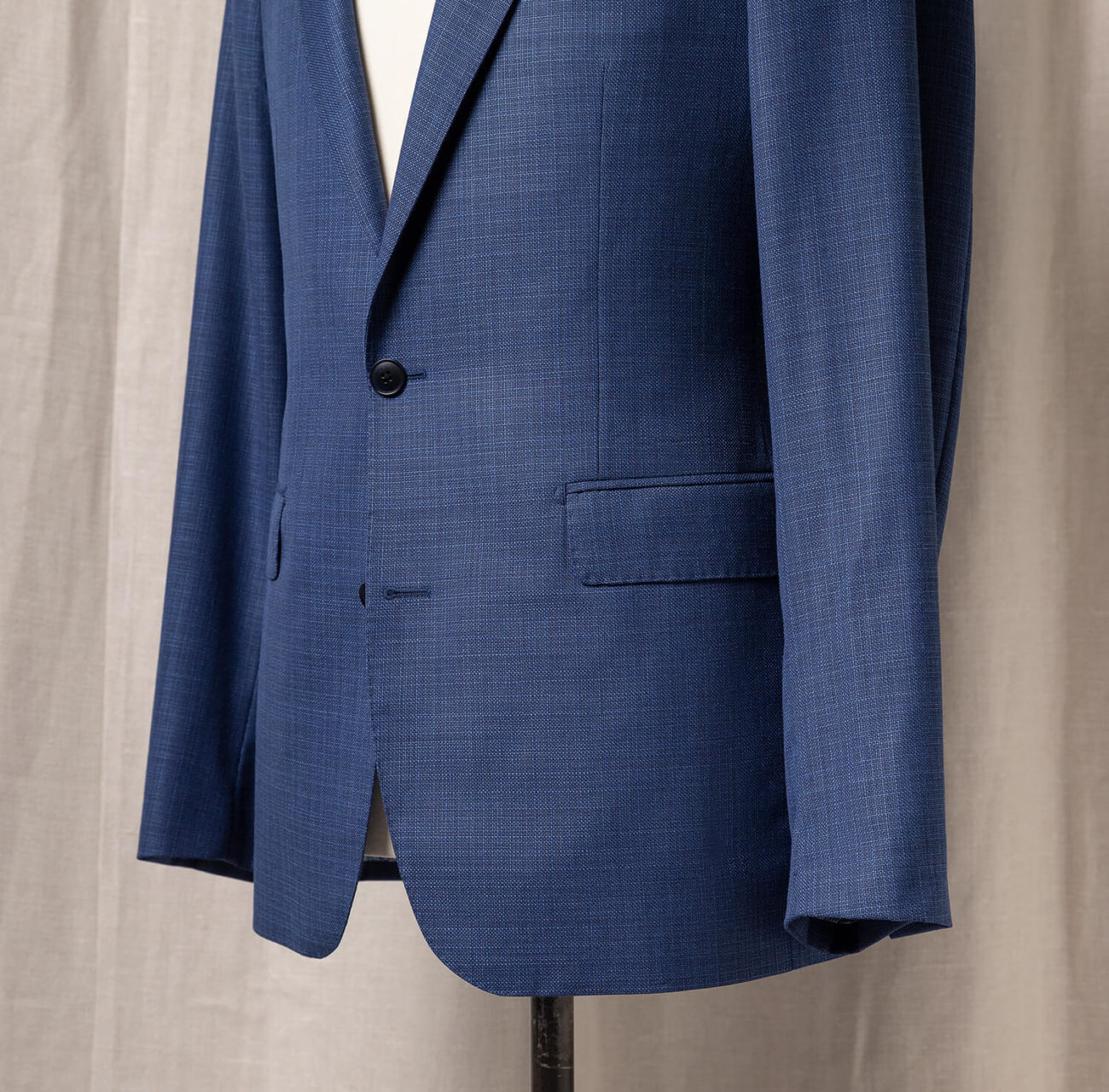 Back in the 1800s, when the suit was invented for outdoor leisure, it was primarily worn for activities like horseback riding, treks through the countryside, and strolls along the beach. Logically, this meant the wearer was exposed to the elements while in motion, which meant the contents of his pockets were not entirely safe from debris, rain, or spilling out. Enter the jacket pocket: complete with optional flap for extra protection and security. Optional flap? That’s right, when not functionally valuable, the flap was designed to be hidden within the pocket itself (which some men still do today), making it virtually indistinguishable from the sleeker jet pocket. Although these pockets were initially crafted at a slant to make them easier to access on horseback, the modern man can choose from slanted or straight flap pockets as he sees fit. 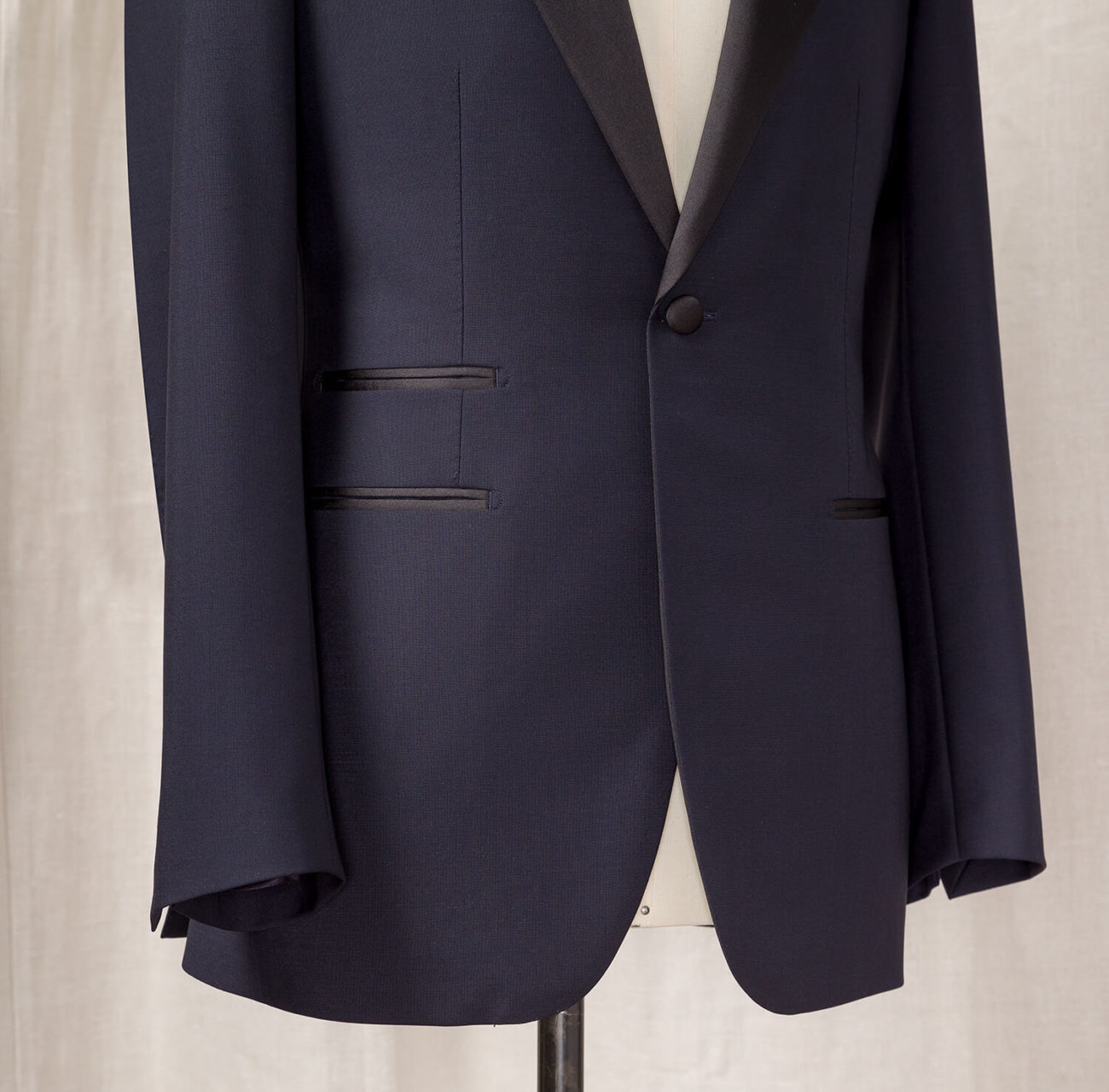 The jet pocket at its core is the same as the flap pocket, without the flap – essentially the sharper, more streamlined cousin. Both feature thin strips of fabric above and below the opening, with the pocket itself being invisible from the outside. Also known as a welted, besom or slit pocket, a jet pocket forgoes the protective functionality of the flap in favor of a cleaner silhouette. Slanted or straight, it’s considered the most elegant type of pocket and is generally the only type used on formal evening wear. In the case of a tux, they are usually made in the same slightly contrasting fabric as the lapels. All that said, this pocket is a perfectly dignified option for a business suit or certain casual styles too.

Surprisingly, pockets as we know them today are a relatively new invention. Separate pouches worn close to the body were used all the way up until the 17th century, when historians date the first sewn pockets (for men, that is — women still had to wait another 200+ years for them to become commonplace). Sewn on the outside of the garment rather than between the fabric and lining, patch pockets offered a simple, easy-to-make design and plenty of storage space. They really took off with the invention of sports and safari jackets. Even today, patch pockets exude an element of ruggedness and are considered the most casual type of pocket. But don’t let that fool you: these days, a well-considered patch pocket can add a modern twist to even the most professional suits. 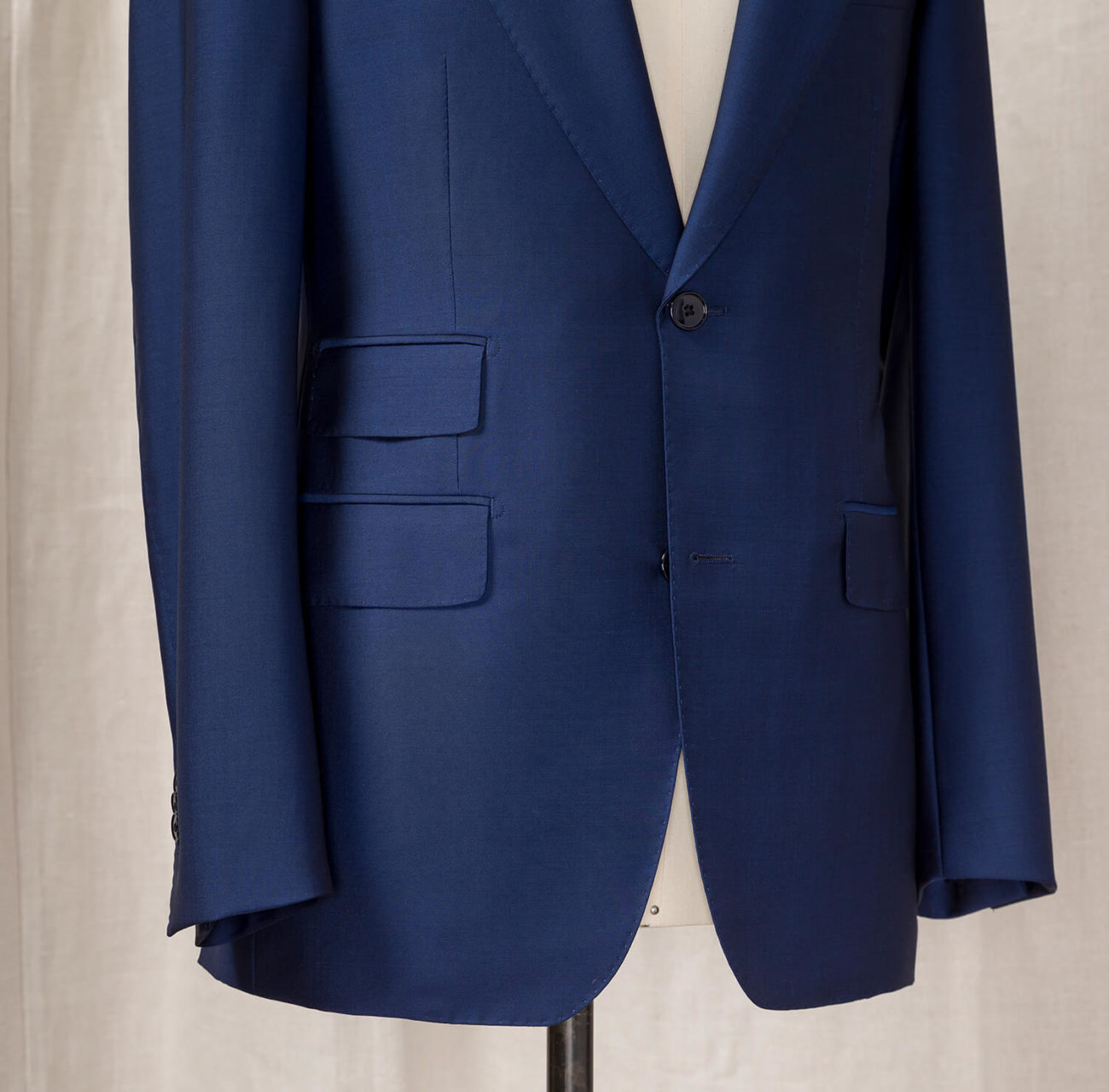 Also known as a change pocket, this little detail came about when travelers on horseback were keen on having an extra pocket to allow for easy coin access at toll roads. Then, during the Industrial Revolution, as daily train commutes became standard for working businessmen, the presence of a pocket for tickets became increasingly popular. You’ll find these placed just above the right pocket on a jacket, ideal for the right-handed man. Usually straight or slanted, the pocket is usually with or without a flap in keeping with the style of the larger pockets and about half their width. Today this detail is more of a nod to the sartorial past or a place to keep small business or bank cards than a place for actual tickets. 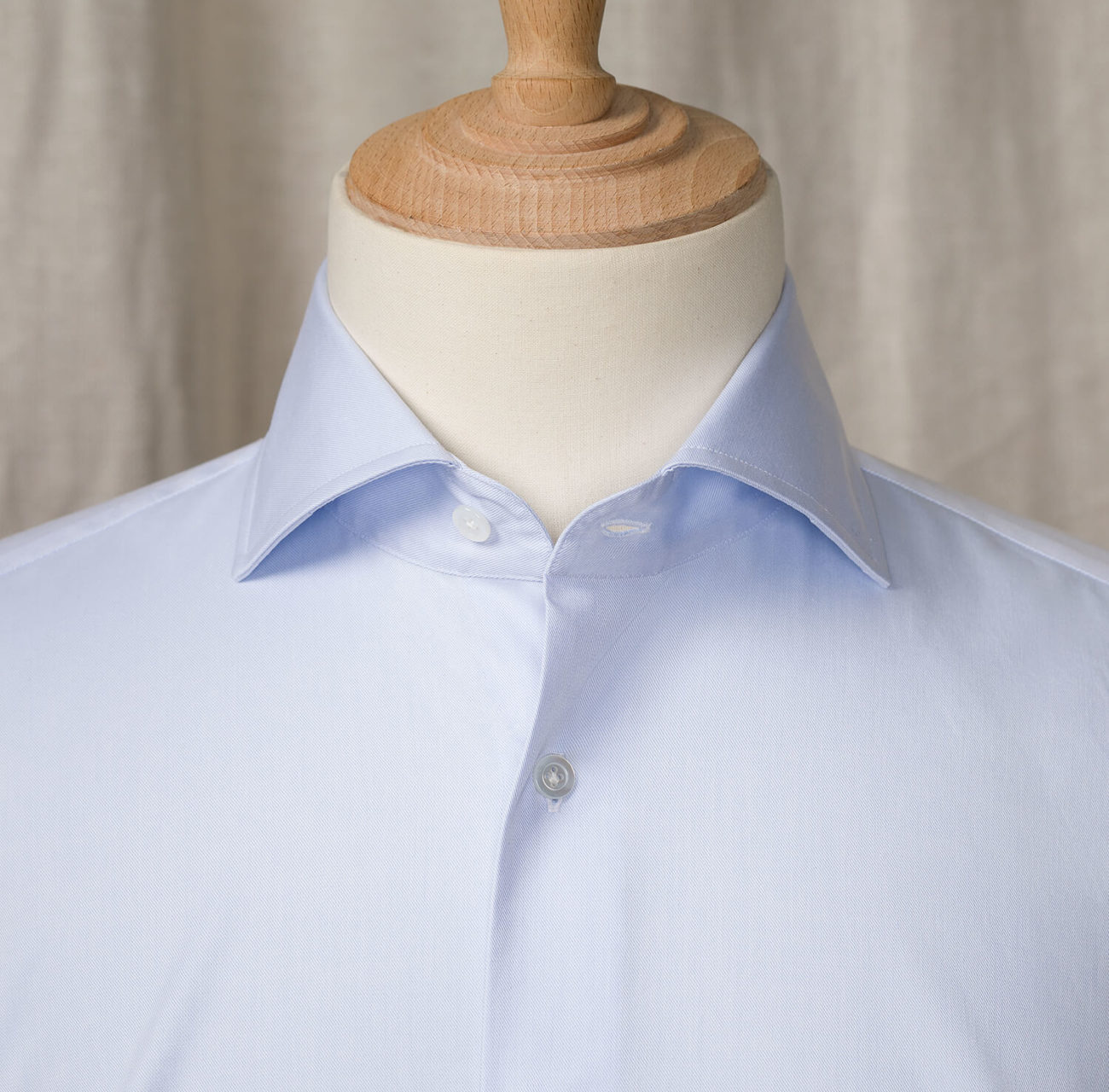 Having first appeared in the 1930s, the cutaway collar was developed in tandem with the rise of the wider Windsor tie knot. Given its volume, the Windsor knot evoked a need for more space at the center front — hence, tailors began “cutting away” the collar’s points, leaving them shorter and angled to the side. Even today, the distance between the two points on a cutaway collar is greater than on any other style. Offering a twist on the more standard widespread style, the cutaway is still great with wider tie knots, thicker ties (e.g. knitted or wool) and tie-less or unbuttoned for a decidedly modern, European look. 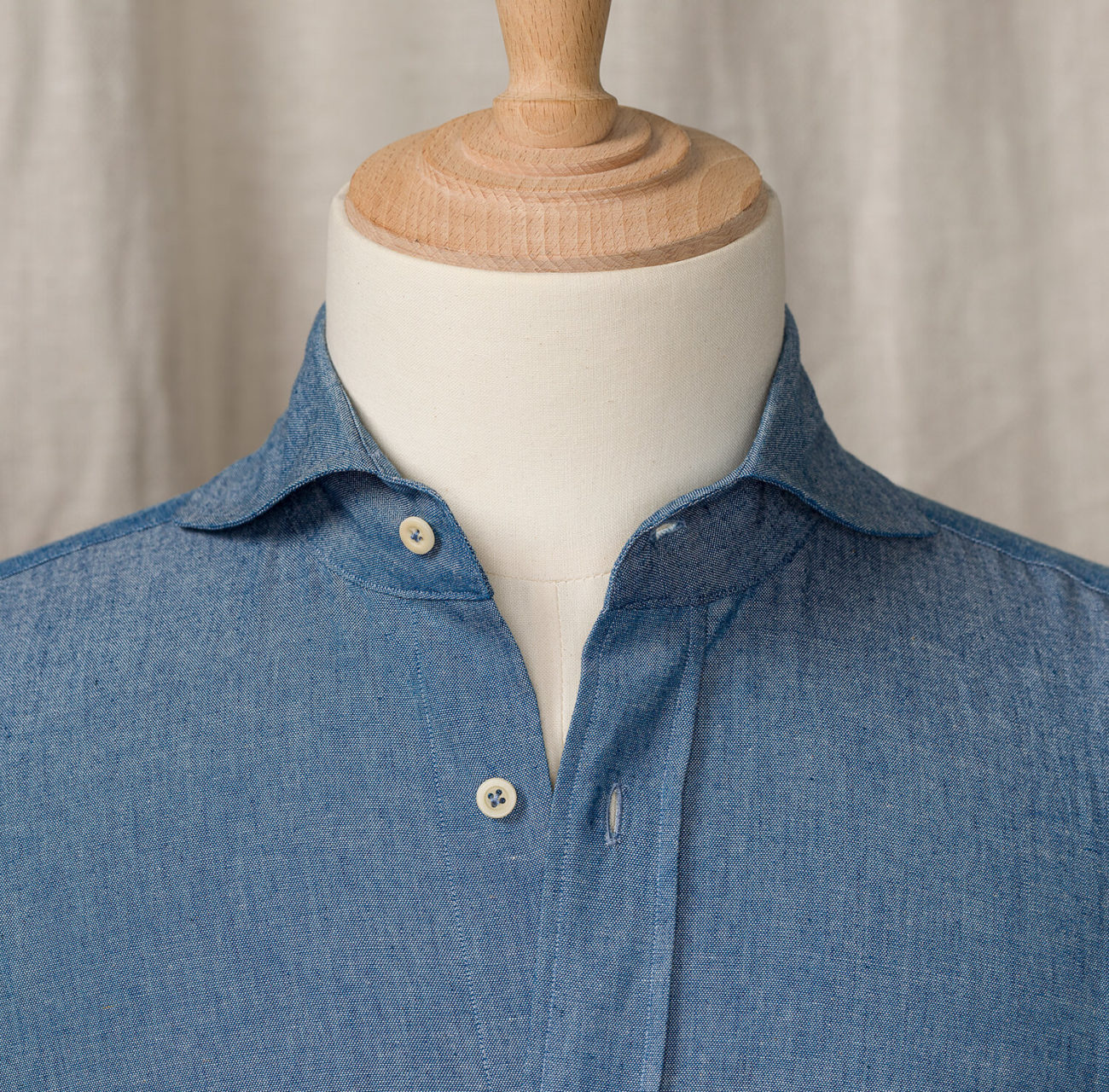 Like the cutaway but less extreme, the points of the wide-spread collar also turn away from the center, keeping them hidden under a jacket and leaving a nice amount of space for an averagely sized tie knot, such as the half-Windsor or four-in-hand. First made popular as a softer and more comfortable counterpoint to the rigid, detachable shirt collars that had been the rage for nearly a century prior to the 1920s and 30s, we consider the wide spread collar the most versatile today: common in the business world and perfectly neutral for more casual, laid-back affairs. 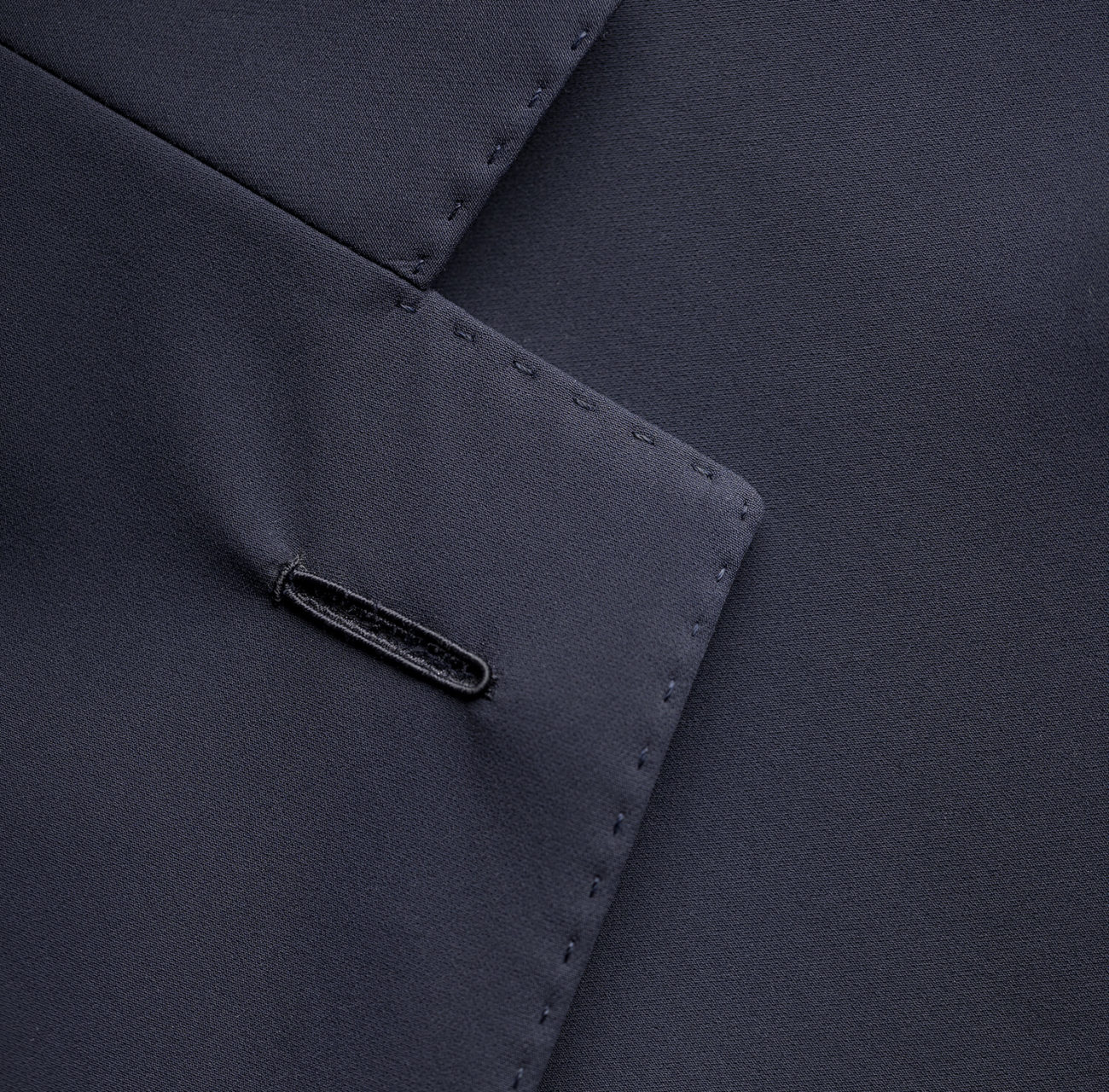 Look closely along the edges of the lapels, cuff splits and flap pockets, and you’ll discover a row of delicate small stitches either 2mm (classic) or 6mm (bolder) from the edge. Why? Because they help these edges stay straight and flat — and because they lend a characteristic sense of refinement to the look as a whole. Originally done by hand and referred to as the pick stitch, this subtle embellishment is called AMF stitching when done by a highly specialized machine, invented in the 1930s to mimic the quality and function of a hand-sewn pick stitch with impeccable accuracy. Seen as a definite hallmark of the well-made suit or jacket. 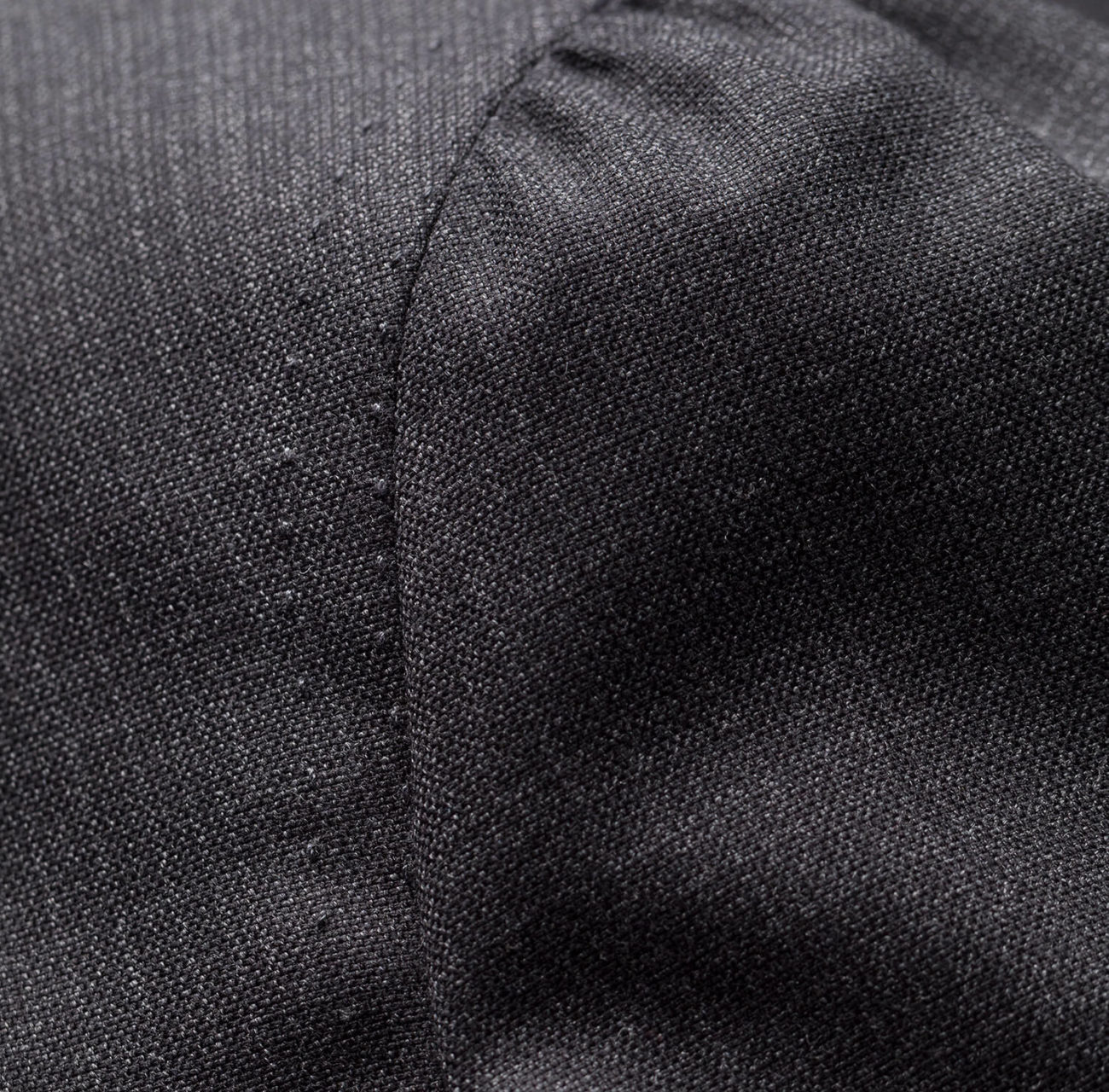 When you think of a Neapolitan-style suit, you probably think of doppio impuntura or ‘double pick stitching’. It’s a backstitch that looks like a little dot on the surface of the fabric, in this case in two rows. The doppio impuntura runs throughout the sides of the lapel, collar, pockets, and shoulder seam, usually in a color matching the fabric of the garment. As a highly time-consuming process and visible example of handwork, it’s considered a sign of excellence. 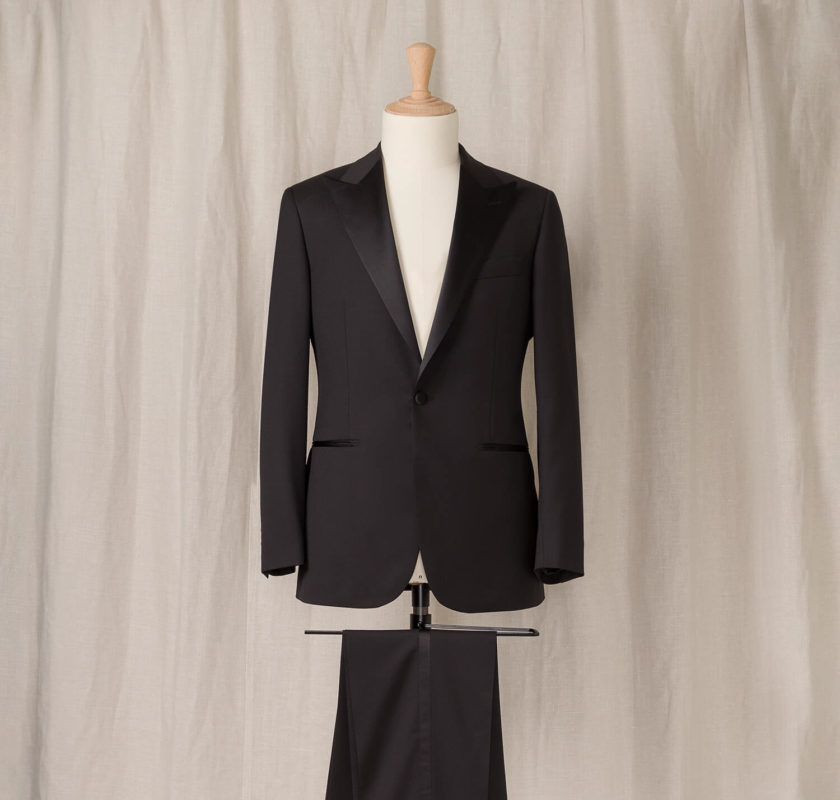 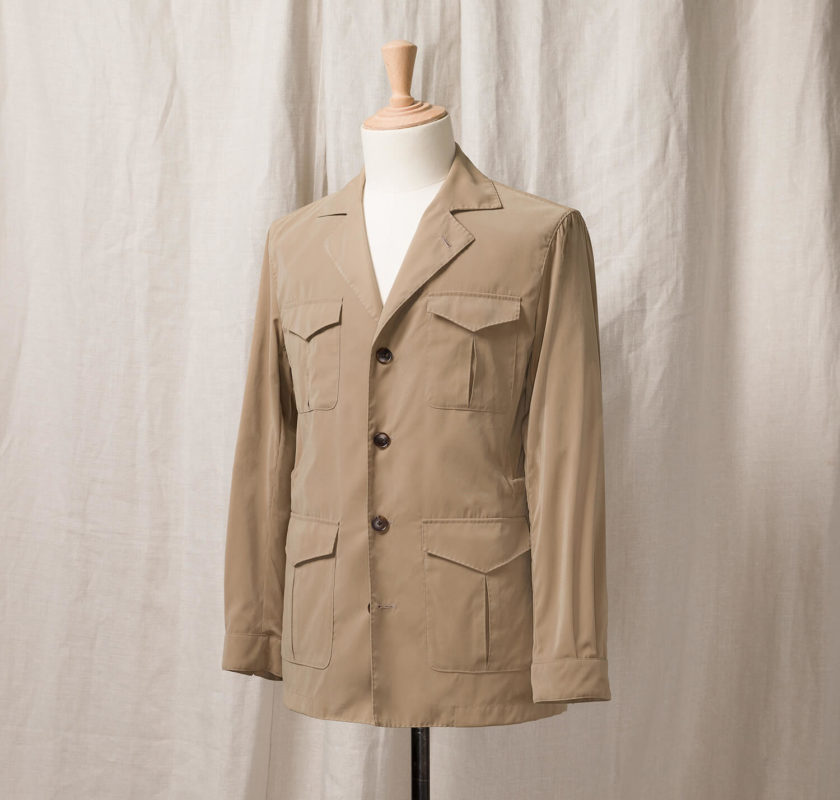 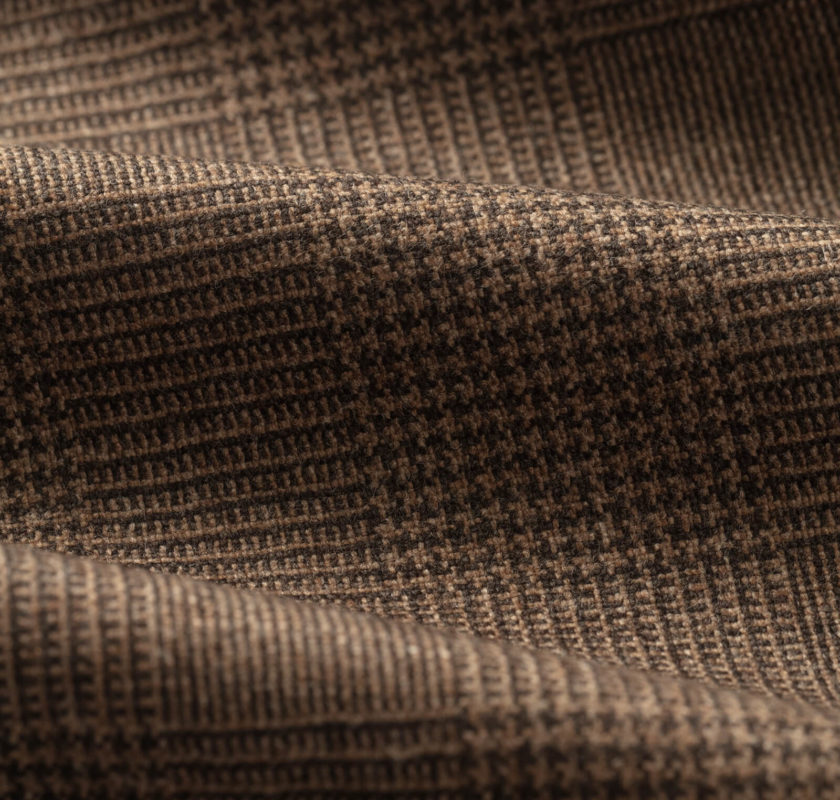 Choose the type of appointment
3 / 7
Where are we meeting?